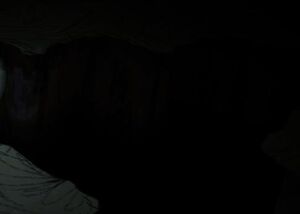 The Abyss acts as a barrier, as opposed to Biomes, much like the Ocean. No living thing can cross the abyss,even flying Mobs like Batilisks.

It is only present in Caves and Ruins in Sandbox Mode, and in Chapter 6 of Adventure Mode.

Objects that are situated very close to the abyss may drop their items in this endless pit, and aside from bugged objects, they will fall into the depths and be unretrievable.

Unlike its surface counterpart, the Ocean, which can spawn Pengulls, the Abyss currently doesn't spawn any Mobs.