“I want to use it, and I want the world to know that I did.”

“I hate that arrow!”

“I will defeat you, tiny arrow!”

“I've never much cared for metaphor.”

“I AM GOOD AT REPEATING TASKS”

“I feel a compulsive urge to activate it, again and again.”

“Even THEY couldn't build something so devious.”

“My victöries shall be remembered!”

“I always wished to make a name for myself.”

The Accomploshrine is a craftable structure only available on the console versions of Don't Starve. It requires 10 Gold Nuggets, 1 Cut Stone, and 6 Gears to craft and an Alchemy Engine to prototype. 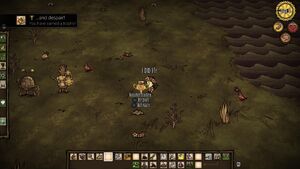 Willow attaining the ...and despair! achievement.

Each time the player turns the handle on the device, the cranking sound will play at a higher and higher pitch until the 25th crank. After every 25th activation, the shrine will release a firework with a similar light effect as Lightning, and the player's character will remark on their accomplishment. When the player obtains the "...and despair!" achievement, a bigger fireworks explosion, flags, and music will come out of the Accomploshrine, and the character will comment again on their achievement.