“I wonder what function this served.”

“Light without fire is unnatural.”

“Is light, but not good light.”

“It pulls power from beneath.”

“The ancients seem to have used nightmare fuel to power everything.”

“They should have used wood.”

“The overuse of fuel was their downfall.”

“Not exactly my kind of nightlight.”

“I don't care how weird it is, as long as it keeps darkness away.”

“Am I crazy or is this light not helping my situation?” 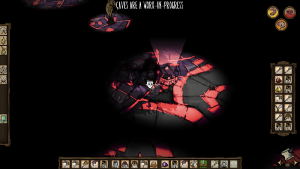 The lights are fueled by Nightmare Fuel extracted from unknown depths below. This is a major example of the excessive use of Nightmare Fuel by the Ancients that led to their downfall.

Nightmare Fissures are objects that appear in the Ruins and rarely in Caves, more specifically, in the Stalagmite Biome. They act identical to Nightmare Lights. Depending on the phase of the Nightmare Cycle, they emit more or less light - the greater the light radius, the higher the chance of spawning Shadow Creatures.

Each fissure can only spawn one creature, either a Terrorbeak or Crawling Horror. If the player has been detected by either one of these mobs, all other Terrorbeaks or Crawling Horrors in the vicinity will become solid and will be able attack the player in a group. Once the fissure is closed, the first spawned Shadow Creature will automatically die, and the other ones will become neutral, assuming the player has enough Sanity.

Nightmare Fissures will reappear at the same location after a period of time. It is advisable to put a Sign or other item with a Map icon near these fissures to mark their locations, since these are the best places to find Nightmare Fuel.

“I don't recognize any of these symbols.”

“It's in some other language.”

“Scrawlings of a tongue lost to time.”

“It would take much too long to decipher.”

“I can't believe I've forgotten how to read this.”

“The writings öf the göds t'were nöt meant för us.”

“We never learned those letters.”

Ancient Obelisks are naturally spawning objects exclusive to Don't Starve Together, introduced in A New Reign. They replace Nightmare Lights in the Atrium Biome in the Ruins.