“Tiny rabbit! Hide from me!”

“He is wandering mindlessly, oblivious to his fate.”

“IT IS PERFORMING A SEARCH ALGORITHM”

“It's some kind of Lagormorph. With horns.”

“I've been here too long- it actually looks tasty.”

“Look at its little ears!”

A Rabbit is a passive Mob commonly found in Grassland, Forest, and Savanna biomes. They drop 1 Morsel when killed, while their Beardling counterparts drop Nightmare Fuel and Beard Hair. Rabbits are cowardly creatures and will run away if the player gets too close. They will also run straight to their Rabbit Holes at dusk and if they witness the death of a nearby Rabbit. They are considered innocent creatures, and killing one adds 1 point to the player's naughtiness level, which can cause Krampus to appear. However, killing them by directly cooking them over fire (which yields a cooked morsel) or starving them to death to obtain a morsel does not add to Naughtiness.

As inventory items, they can be murdered by right-clicking them to produce Morsels.

During Winter, Rabbits' coats will turn white, much like Rabbits in real life.

When the player digs up a rabbit hole, a rabbit will come out of it but the hole will be gone.

A Rabbit will turn into a Beardling when a character's Sanity drops below 40%. All Rabbits, including those in the inventory or containers will become Beardlings.

They behave just like normal Rabbits, but appear to be covered with black Beard Hair. They can be murdered by right-clicking them in inventory to produce Beard Hair, Monster Meat, or Nightmare Fuel, or cooked over a fire to get Cooked Monster Meat. Beardlings will not drop Morsels. Just like Rabbits, Beardlings are considered innocent creatures, and killing one adds 1 point to the player's naughtiness level.

Like many other Monsters, Beardlings have an insanity aura that lowers the player's Sanity level when the player is nearby.

Killing Beardlings is one of the easiest ways to get Beard Hair while not playing as Wilson. It is also arguably the best way to farm Nightmare Fuel, since both items can be obtained from killed Beardlings in relative safety.

To catch a Rabbit, place a Trap directly above a Rabbit Hole. This will guarantee the capture of a Rabbit and can be done with large amounts of Rabbit Holes, which can provide the player with a steady supply of food. The best place to farm Rabbits is in the Savanna, where Rabbit Holes are very abundant.

While tedious and impractical, Rabbits can be killed in melee. Rabbits will flee from the player when approached, but they are slower than the player and can be cornered. However, if the player drops a carrot/berry on the floor and wait until a rabbit starts nibbling it, the rabbit can be struck in melee without it attempting to flee, this returns the carrot as well if the player is reasonably quick.

With normal damage modifiers, Rabbits instantly die from any hit from a Spear or any better weapon. The only tools that will do the same are the Axe, Pickaxe, their golden counterparts, and the Pick/Axe. Rabbits take 1 blast from the Ice Staff to be frozen and 1 Sleep Dart to be put to sleep. 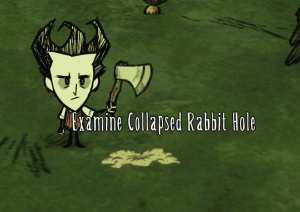 In Don't Starve: Reign of Giants, Rabbits inside the player's inventory will starve in 2 days unless fed with Fruits or Vegetables. One portion of food will completely fill its hunger so it is most efficient to feed the rabbit when nearly starving. If a Rabbit starves, it will turn into a fresh Morsel. Starvation also applies to rabbits trapped under a Trap, with the Morsel laying on the ground and spoiling as normal once the Rabbit has died. Any creature that would normally eat meat on the ground can then eat the Morsel.

Rabbit Holes collapse after the first Rain in Spring, becoming a Collapsed Rabbit Hole until a few days into the next season when they will open up again.

The Catcoon will occasionally vomit a live Rabbit. This Rabbit will lie on the ground for a short time (similar to when a player releases a Rabbit) and can be killed with a melee weapon (if the aforementioned Catcoon does not kill it first). Rabbits also have a 0.1% chance to be dropped by Tumbleweeds.

Rabbits and Moleworms can fall from the ceiling during earthquakes along with other items. They will be in their 'stunned' state as if they were just dropped by a player, but will behave as normal shortly afterwards.