From Don't Starve Wiki
Jump to: navigation, search
“What treasures lie beneath?”

Caves are large underground sections of the world filled with unique features. They are so large that they are generated as whole new maps upon entering. Caves have their own artwork, terrain, and maps. Various creatures, plants, and other objects that do not appear elsewhere reside within Caves. 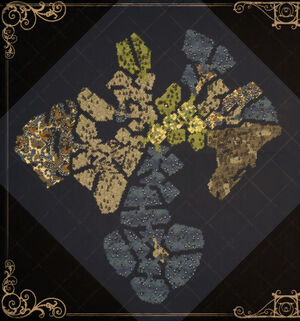 A Cave can be found underneath a Plugged Sinkhole. Upon mining the plug, an open Sinkhole appears with a rope leading down into a new Cave. Each Sinkhole connects to a different Cave. Each Cave is generated just like a new world. A different loading screen (pictured above) will play while it is created. While within a Cave, time in the world above continues to pass and vice versa. Once a Sinkhole is unplugged, Batilisks (see below) can emerge at Dusk and roam the surface world.

Each Cave begins in a small circle of light with a rope hanging down and a skeleton at the bottom. The worlds within a Cave are affected by the Day-Night Cycle, Cycle of the Moon, and the four Seasons. Caves are always dark depending on the locations. This means that Sanity slowly drains, and in areas of complete darkness, characters are vulnerable to Charlie. Some natural light does leak in from the surface at places, however, and there are other light sources as well. When the map is opened, players will see a new set of icons and terrain specific to the underground (pictured at right).

Giants and Hounds will not spawn in caves. If a player skips a hound wave while spelunking, the wave will occur as soon as the player emerges from the cave. If a player skips the spawning of a giant, that giant might also spawn upon resurfacing (sometimes skipping the warm-up "growling" period). Staying in a cave until the season changes will prevent the previous season's giant from attacking in this manner.

While underground, the player may experience Earthquakes. When this happens, the screen shakes and a rumbling sound plays. Rocks, Flint, Nitre, Marble, Gold Nuggets, and sometimes Red and Blue Gems will fall from the Cave ceiling. Each of these is preceded by a small shadow and causes damage if it hits the character.  Many of the items that fall during an earthquake shatter when they hit the ground, but some will remain intact. Once the earthquake ends, Slurtles and Snurtles leave their homes and roam the Cave in search of minerals to eat.

In addition to normal Spiders, Fireflies, and Tentacles, the following creatures reside only in Caves:

More creatures can only be found in the Ruins, below the Caves.

Some surface plants are also found in caves, such as Saplings, Evergreens, Berry Bushes, Grass, and Mushrooms. Additionally, several plants only grow underground: Light Flower, Cave Banana Tree, Fern, and Mushtree and its Red and Green counterparts. Like the aboveground versions, Berry Bushes and Grass will regenerate after a few days. 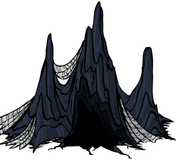 Stalagmites are a common sight in any cave, and can be mined for Rocks, Gold, and Flint.  Similar looking Spilagmites are home to Cave Spiders and Spitters, which can only be destroyed with a Pickaxe. Less common are the Slurtle Mounds, which spawn slow-moving Slurtles and rarely, Snurtles. Additionally stalactites and various rock formations can be found in the dark areas of the caves. 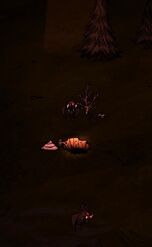 The 'heavenly light' that shines on the sinkhole when the player exits the caves.

Nightmare Fissures can be encountered in the caves, which look like jagged cracks in the ground, with a color that changes based on the Ruins' place in the Nightmare Cycle. Like the Plugged Sinkhole to the Ruins, 2-3 Nightmare Creatures which can detect and attack the player regardless of sanity level will spawn nearby.  If the player has experience with combat, and prepares/chooses his ground carefully, these monsters can be farmed for Nightmare fuel, though the constant sanity drain in the caves should ensure hostile encounters with nightmare creatures anyway.

Like on the surface, Set Pieces appear in caves too, often with a skeleton, and even with advanced buildings such as Ice Boxes, Science Machines, and Chests.

The Entrance into the Caves from Don't Starve Together.

Life Giving Amulet, Touch Stone or Meat Effigy will reincarnate the player. The Meat Effigy no longer needs to be underground to resurrect the player.

In the Reign of Giants DLC, Rabbits and Moleworms can fall from the ceiling during earthquakes along with other items. They will be in their 'stunned' state as if they were just dropped by a player, but will behave as normal shortly afterwards.

In Don't Starve Together, the Caves received some re-balances. Their generation algorithm has changed to be more like the surface world, having fewer dead-end corridors. Gunpowder no longer starts earthquakes. Light Flowers now only light up when a player approaches them, and they now have a dormant state to prevent players from exploiting their limitless light.

Since the ruins were moved to the same level of the caves, players must now have double caution when venturing through the darkness.

The Toadstool can also be found in the caves.

If a player is inside the caves during Summer, Cave-ins can occur which drop Boulders around the player. These are caused by the Antlion on the surface.