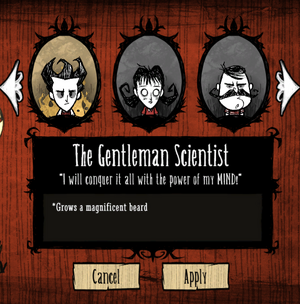 Character select before the world generates. 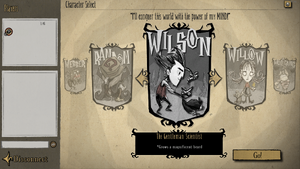 Character select in Don't Starve Together.

There are currently sixteen playable Characters in Don't Starve and its DLCs. Each character has at least one character specific perk, in addition to various bonuses and penalties to their stats, and usually are different in play style. Each character is "voiced" by a different instrument, and speaks differently when examining items and objects. The only exception to this is Wes, the speechless mime, who does not make sounds or have quotes, instead he uses pantomimes.

The first accessible character is Wilson, considered the protagonist and the focus of the game's story. Most of the other Characters can be unlocked when sufficient Experience has been accrued, gained at Death or when escaping to a new world. There are currently five exception characters that are not gained by conventional experience, but through game feats. If the player has not unlocked a Character, it will appear as their respective silhouettes. Upon selecting a silhouette, the Poster on the left will be a coffin shut with chains and a lock, and the description will simply say "The Unknown".

Below are the abilities and requirements to unlock each character.

There are several additional characters planned for Don't Starve. These other characters only exist in the form of portraits, sound, and other bits found mainly in the game files. For a list of these unimplemented characters, please refer to the Unimplemented Characters page.

On the PC version of Don't Starve, Characters created by users can be published on the Steam Workshop or the Klei Forums using the Don't Starve Mod Tools. Once downloaded, the character can be set up in its directory. When you start up the game, click the Mods button and enable the character. They will now be available for use after restarting.

Maxwell appears before the start of every game, saying, "Say pal, you don't look so good. You better find something to eat before night comes!" He disappears before the player assumes control of his or her character.

As seen in the Forbidden Knowledge video, Maxwell gives Wilson the knowledge necessary to build an impressive machine which captures him upon activation.

Maxwell will not appear when playing as himself, instead he will say, "Freedom, at last!"

Abigail is Wendy's twin sister, and as Wendy's perk, she can be summoned with Abigail's Flower.