Charlie, otherwise known as the Darkness or the Night Monster, is a hostile damage source unseen to the player in-game. She only attacks when the character is in complete darkness, unable to see. (Characters will state when they are vulnerable, e.g. "It's so dark!"). When being stalked, the character will become alarmed, exclaiming things such as "What was that?", followed by a loud "whoosh" to signal her approach. Moments later, a slashing sound is heard and the character will take 100 damage and 20 Sanity loss. The first attack will happen 5 to 10 seconds after the character enters complete darkness, with the character being stalked when 60% to 20% percent of this time is left until the attack. The attacks will continue every 5 to 11 seconds until the character finds or creates a light source in order to see. Most characters can survive a single attack, even without armor.

In the lore, Charlie was previously Maxwell's female assistant for his magic shows. After the two of them were brought into the realm of the Shadow Creatures (also referred as "Them" by Maxwell), it is believed that Charlie was transformed to have the demonic traits and personality to become the night monster. It was later revealed that she is also the younger sister of Winona, who she mentions in both of her letters to Maxwell in the William Carter Puzzles. In the A New Reign cinematic video, her night monster form was visibly depicted for the first time. While she still has a human conscience, it seems that she's partially controlled by evil forces and has little control over her violent actions. She is the secondary antagonist of Don't Starve and its DLCs Reign Of Giants and Shipwrecked, and the main antagonist of Don't Starve Together. 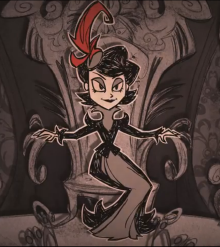 Charlie sitting down on her new throne after combining her two personalities.

In Don't Starve Together, Charlie serves as the main antagonist of the world, carrying on after Maxwell's reign while still being the night monster. After the events of Adventure Mode take place in which Maxwell and Wilson swap places, Charlie approaches Wilson as her human self and frees him from the Nightmare Throne. But after the demonic night monster version of her personality overpowers her, she attacks Wilson to absorb the powers he obtained from the throne and sends him back to the wilderness with Maxwell.

After Wilson and Maxwell finish building the Jury-Rigged Portal to bring other characters into their part of the realm, Charlie destroys it and replaces it with her own version, the Florid Postern, marking her new reign in the Don't Starve world.

The following light sources will prevent Charlie from attacking:

Comments from Charlie could be found in Maxwell's and later Winona's DST speech files around and after the time of the Cyclum Puzzles and ANR. Currently known ones are listed here, underneath the corresponding quote: