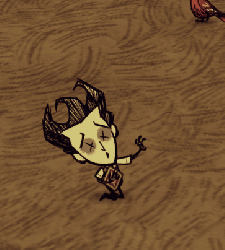 Wilson dying.
“I envy his escape.”

Death is one of the key elements in the game, and one of two ways the player can gain Experience and unlock new Characters, the other being traveling to the next world via Wooden Thing. Upon death, the player drops all their carried inventory, even if resurrected afterwards, but only permanent death will provide Experience. All deaths, permanent or otherwise, are recorded in the Morgue.

In Reign of Giants (RoG) and Shipwrecked (SW) DLCs, if the player dies and resurrects, there will be a Skeleton found at the spot where the death has occurred, except when the cause of death is drowning in SW. These DLCs introduce additional causes of death:

There are currently three Items that allow the player resurrect themselves upon death – Life Giving Amulet, Meat Effigy, and Touch Stone. Woodie's Were-Beaver form will also automatically resurrect him upon the Log Meter reaching 0. When an item is used to revive, it is destroyed and cannot be used again. Resurrection incurs the following penalties:

If not resurrected, the character and the generated world are permanently lost.

In Don't Starve Together resurrection mechanics have changed. Players are no longer revived automatically if a reviving item is present in the world or in their inventory. Instead, they are turned into Ghost Characters (only in Survival or Endless mode), which can revive themselves using the Florid Postern (only in Endless mode), a Life Giving Amulet, a Meat Effigy, or a Touch Stone. Players can also be revived by another player using a Telltale Heart.

Resurrection incurs a maximum-health penalty, unless a Life Giving Amulet, a Meat Effigy, or a Touch Stone was used for the resurrection. Therefore, resurrecting via the spawn portal (only in Endless mode) or with a Telltale Heart will incur the penalty. To remove the maximum-health penalty, the player must use a Booster Shot for every death they received during the game. 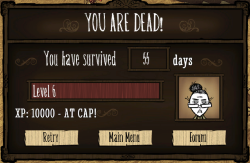 The "You are Dead" screen from older versions of Don't Starve
Retrieved from "https://dontstarve.gamepedia.com/index.php?title=Death&oldid=522754"
Category: