Since late 2012 when Don't Starve became available to the public, there have been periodical updates, which introduce new content, fix glitches, or balance the game. The final major update before the game's official release on the PlayStation 4 was in October 2013, after which all updates focus on bug-fixes and performance. The player must download the latest patch before playing the game. 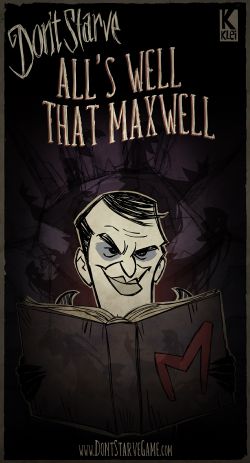 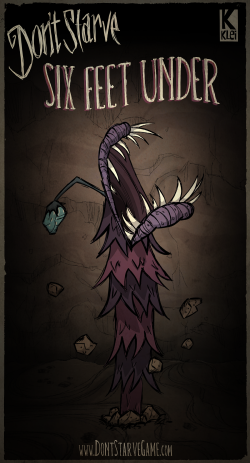 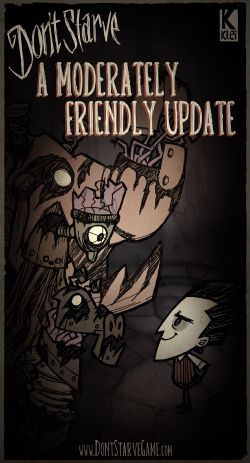 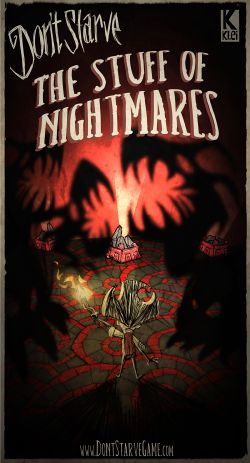 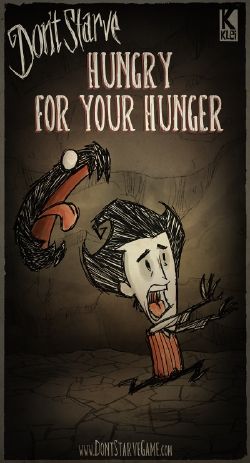 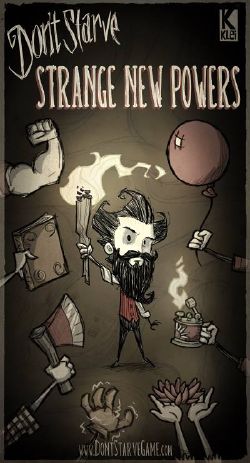 He's a fun-loving Canadian who spends too much time in the woods. His axe talks to him, and he has a terrible curse.

We added a new tab for gem-based items, and added amulets and staves for all of the existing colors. Watch this space for more mind-bending magic in future updates!

There is a new mod configuration screen that lets you activate/deactivate mods from within the game. Check out the modding forum for details! 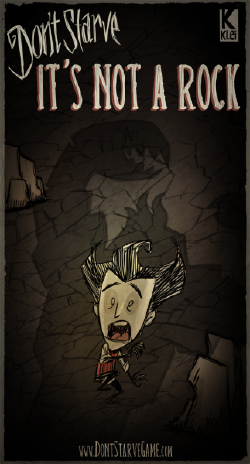 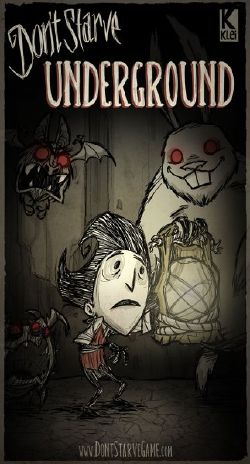 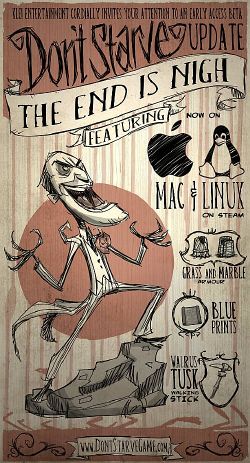 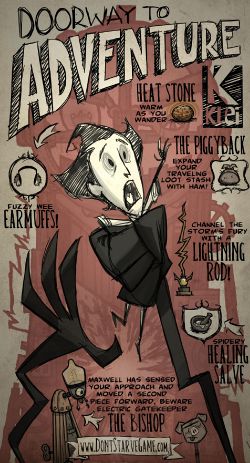 Level Descriptions: The adventure levels are still being worked on and refined, but here's an idea of where the are right now and where we want them to be.

Near-constant rain and frequent short winters take a toll on your sanity and your fires. You must survive in these more extreme conditions as you hunt for the teleportato pieces. When complete, this level should feel similar to a survival level, but with increased pressure on all your resources.

This level is smaller and shorter than the previous level, but it is permanently winter! The aim is to survive the cold without any preparation time. When complete, this level should keep you moving quickly.

The level features a resource-rich central island, surrounded by dangerous lands containing each of the teleportato pieces. Right now it's still fairly lush, but eventually the outlying islands should be quite inhospitable!

Use the first land to stock up. Once you pass through the dying wormhole, you'll need everything you've got to survive. We're currently still working on the balance between the two lands.

This level should put your survival skills to the ultimate test, not only will there be harsh weather and tough monsters, but resources will be extremely scarce. Eventually. Right now it's just been roughed in, but it's still got lots of badguys in it!

Maxwell is still devising this level... 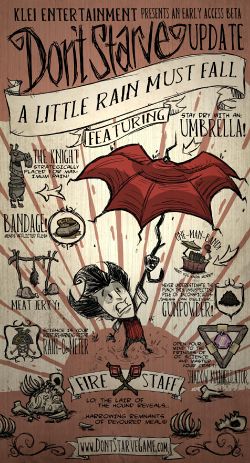 New stuff in the world 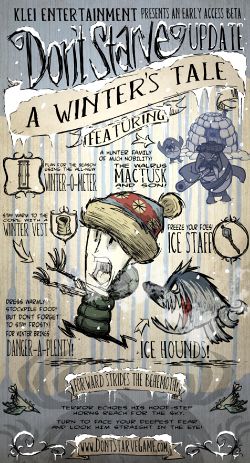 Winter comes every 20 days or so, with snow and a new audio landscape. Ambient air temperature is modelled, and your character will get colder the longer he/she stays out in the open. Getting too cold for too long will cause freezing damage. You can extend your time away from the fire by wearing warm clothing. Nights are longer, and vegetation does not replenish. Bees and butterflies don’t leave their houses in the winter.

There is a new mod API that should make mods break less when we update, and allows multiple mods to work at the same time. Here is some documentation on how to create a mod. Language packs are now actually supported. We supply a strings.pot template file with every update, and the game can load .po language files. This should make maintaining translations a lot easier, and you can use industry-standard tools. For more info, see here.

Adventure Mode (continued) This update continues the development of adventure mode, and seeks to refine the difficulty curve.

Sandbox Mode (continued) Added a new world creation screen. There are only a couple of options enabled currently, but soon you will be able to unlock more!

Sanity tuning From our testing, we determined that sanity was coming on too early for new players, but was also easily avoidable by established players. The intention is for sanity to be a long-term lurking danger, so this was the complete opposite of what we were going for. Here are some changes to help rectify this: 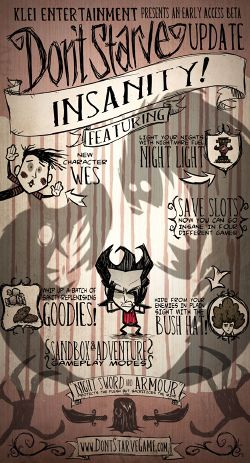 New Character: Wes - Do you think Don’t Starve is too easy? Try playing as Wes, the mime! He’s not good at doing anything!

Sanity - The player character loses sanity when he is left alone in the dark, gets close to scary monsters, or does crazy things like eating monster meat or jumping through a Worm Hole. Sanity can be regained through acts of dapperness, like wearing fancy clothes in the sunshine and eating candy. Low sanity is not fatal, but strange creatures from another time and place are attracted to madness. There are new, powerful items that can be built from the Nightmare Fuel that they leave behind when killed.

Save Slots - You can have up to four save games at once now. Your existing save will be imported into the first slot when you start the game for the first time.

Sandbox Mode - This is the game as you all know it. There will eventually be a customization screen before you start a level, but you just get the default generation for now.

Experimental Adventure Mode - When you start a new game, you can choose to play in adventure (i.e. story) mode. Currently, there are five levels of difficulty as you progress through the levels. This is an early test, so we have a lot of work to do to make these levels meaningful and fun. We also need to add the story’s ending. This is for experienced DS players who want a taste of the future.

Pathfinding - Monsters and followers can navigate around corners and walls.

Mod Support (steam only)- Modding is now allowed! We’re distributing the source scripts with the game, so have a look in data/scripts, and see what you can do. There is an example (machine-translated) French language pack included with the game to get you started. See the modding forum for more details. 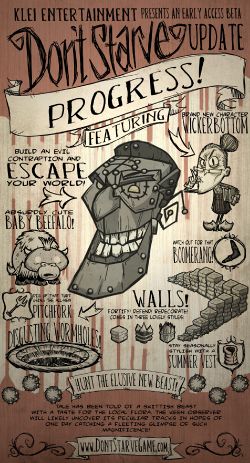 You can escape the world by finding Wooden Thing and activating it. You get to keep your inventory, and you cash-out any XP that you have and unlock characters without dying. This is the first step towards story mode. The world that you escape to is no harder than the first, but this will change soon!

New Research Method: Under the new research method, you unlock access to tiers of recipes by building research machines. You can unlock a specific recipe by building it near an active machine, after which point you can build it anywhere. Your known recipes last as long as you do - they will travel with you to new worlds if you escape, but you will lose them if you die. There are no more research points or grinding. The science machine is now a bit cheaper to make, and the alchemy engine is a bit more expensive.

This is a big change, so we've made it optional for the time being. When you start a new world, you will get to choose between the new research method or the old one. Your progress in the old method is not available in the new method, but will be there if you switch back. We will be phasing out the old method soon, but wanted to introduce the new one carefully.

New Character: Wickerbottom The Librarian can be unlocked with XP. She gets a bonus research tier, because she is so smart. 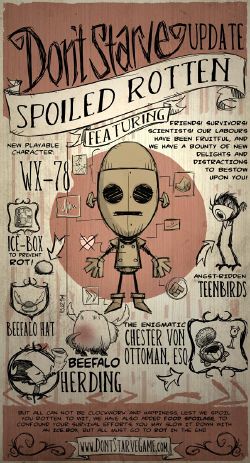 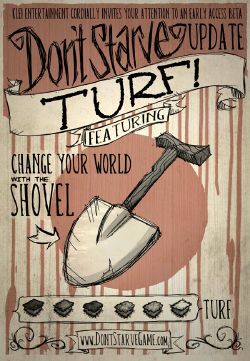 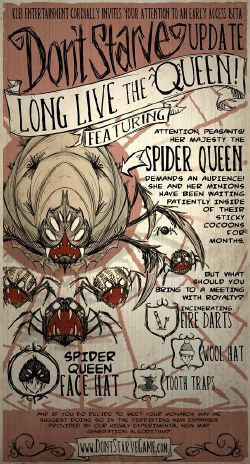 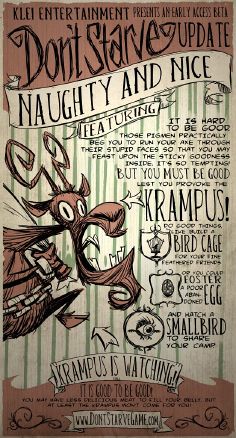 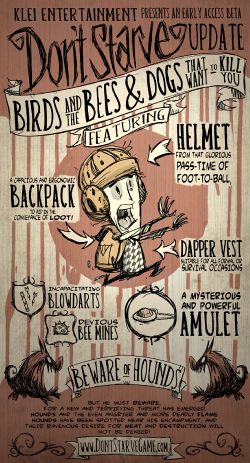