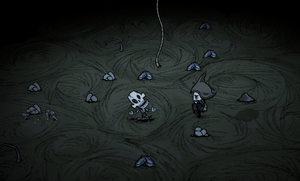 Objects falling during an earthquake; one broke, and one's shadow is visible on the ground.

“The ground shakes. Will it swallow me whole?”

“A tremor! At least magnitude seven on the Richter scale.”

“The ground is heaving!”

“That rumbling can't be good.”

“I don't think that was our tummy.”

“The ground is shaking.”

“That is not a comforting sound...”

An Earthquake is a naturally occurring event in Caves and the Ruins. Earthquakes occur regularly and can even be induced by igniting Gunpowders, Slurtle Slimes, Slurtle Mounds, Snurtles, and Slurtles; using a Telelocator Staff and an Old Bell and attacking a Big Tentacle. Earthquakes cause mineral items to fall from ceiling (making some items renewable), though many are destroyed from shattering when they hit the ground. The items that can fall are:

Falling objects caused by earthquakes can damage the player, Mobs, and Walls. When an earthquake begins, the camera will shake and the character will give a warning before items start to fall. Each object creates a round shadow on the ground, indicating where it will land. A falling object will cause damage until it has shattered or stopped bouncing. These items can destroy walls and other structures over time.

Splumonkeys will return to their Splumonkey Pods as an earthquake begins. Slurtles and Snurtles will spawn from Slurtle Mounds after an earthquake, to eat any minerals that have fallen.

Wearing armor will reduce the amount of damage taken from falling debris.

In the Reign of Giants DLC, live Rabbits and Moleworms may fall during Earthquakes in their stunned form. If left uncollected, they will become active as usual, this means Moleworms will create a burrow and pick up other items the earthquake has dropped.