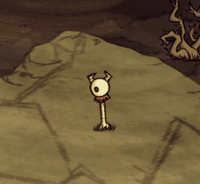 Eye Bone as found naturally in the world

“It is eye bone. Eye bone connect to face bone.”

“It's looking into my soul.”

“IT IS THE DRM KEY FOR THE STORAGE UNIT”

“No one ever told him it was rude to stare.”

“Stop looking at me!”

“I get the feeling I'm being watched.”

“The eye follows me wherever I go...”

The Eye Bone is an item that spawns Chester in Don't Starve. It is a naturally spawned item that is possible to find anywhere on the map, typically lying on the ground near a cobblestone road. In order to obtain the eyebone early on one must find a cobble stone road(different from a normal road); and follow it to a grassland biome surrounded by beehives and ponds. Note: There are cases where it is not found in the grassland biome. In this case it will spawn randomly near the player in a swamp biome.

Once spawned, Chester will continue to follow the player as long as the Eye Bone is in their inventory. The Eye Bone can be dropped on the ground or placed inside Chester to make him stop following the player.

At night or in the ruins, Chester will sleep until enough distance separates him and the Eye Bone. If Chester is killed, he will drop all stored items, and the Eye Bone will no longer open its eye. (it remains closed). The eyelid will reopen after Chester respawns in one day.