"Fertilizer" redirects here. For a list of items that can be used as fertilizer, see Category:Fertilizer. 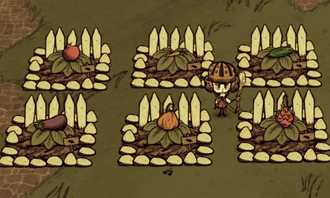 Farming is the process of growing Food or other resources to aid in survival. In general, it requires a permanent base camp where the crops can be planted and grown. There are several types of farming including Farms, transplanted items such as Berry Bushes, and Ranching.

Farms are made by creating Basic or Improved Farms which are fertile patches of ground where Vegetables can be grown. Once built, Seeds can be planted in them which will grow into random vegetables, or Crop Seeds for specific crops. Some Vegetables grown from regular Seeds appear more frequently than others (see table, below).

Farms can be used to grow 20 (basic) or 30 (improved) vegetables before they lose fertility and require additional fertilizing. Crops will only grow if they have light and when the temperature is above 5 degrees; growth stops any other time. When temperature is above 28 degrees crops grow 100% faster; when it's Raining crops grow up to 300% (depending on precipitation rate, which will vary over the course of the rain) faster. This means that when it is hot and raining heavily, crops grow up to 400% faster.

It is possible to use any kind of light to allow crop growth : Campfire, Lantern, Torch, Fireflies or even Pig House. However, this doesn't work in Don't Starve Together.

Specific vegetables can be grown in Farms by using Crop Seeds. These seeds are produced by feeding a Bird imprisoned in a Birdcage any vegetable or fruit; except for Mandrakes or Berries. The Bird will drop 1 or 2 Crop Seeds of the selected type, plus an occasional regular Seed (total of 3 possible seeds). Once planted, Crop Seeds will grow into their corresponding crop.

The following crops can be grown in Farms:

Improved Farms; the depleted one is on the right.

Items such as Guano, Manure, Rot, and Rotten Eggs can be used as fertilizers. When placed on the sprout in a Farm, fertilizers will advance its growth. The amount of fertilizer needed to fully grow a newly planted crop depends on the type of Farm and the type of fertilizer.

Fertilizers are also needed when a Farm loses fertility, which happens after 20 or 30 uses depending on the type of Farm. When a Farm is depleted, it will turn a lighter shade of brown and cannot be used for growing anything until fertilizer is added. Guano will rejuvenate a Farm for 12 additional uses, Manure for 10 and Rot/Rotten Eggs will only provide 2.

Fertilizers are also needed for transplanted plants. Berry Bushes and Grass Tufts that are dug up with a shovel and replanted must be fertilized before they will start to grow again. After a Berry Bush has been harvested 3-5 times or a Grass Tuft 20 times, they will require additional fertilizer. Naturally grown Bushes, Grass, and Saplings never need to be fertilized.

The Bucket-o-poop acts like regular Manure, substituting 1 day and rejuvenating 10 additional uses on a farm.

Crops no longer get a 100% bonus growth rate from heat and can wither in extreme heat. Spring gives a 25% bonus on a crops' growth rate when it is not raining. 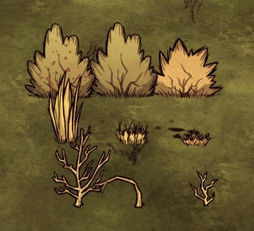 During Summer in the Reign of Giants DLC, Saplings will dry out due to the heat.

Using Pine Cones, Evergreens can be grown anywhere and will be active in both seasons. They can provide a constant and renewable source of Logs, but caution should be taken with any spawning Treeguards.

Planting these items close together will make them easy to quickly gather, but it leaves them vulnerable to Lightning strikes, which can set the entire patch ablaze. This can be mitigated by planting in groups with gaps or building a Lightning Rod. Having them close together also leaves them vulnerable to a mass Fire, whether from Willow's Insanity, a Red Hound dying, Summer heat, or other reason.

Example of a Lureplant farm on top of Cobblestones

Lureplants do not spawn their Eyeplants on Rocky Turf, Cave Rock Turf, Cobblestones, and Wooden, Carpeted or Checkerboard Flooring. This means that surrounding the Lureplant with these types of turf will make it safe to harvest its Leafy Meat.

Since Lureplants are inactive in Winter, Leafy Meat will be unavailable for the season.

A simple Slime Farm with one single mound.

Slurtle Slime is a non-spoiling item used to refuel Lanterns or Miner Hats and cause Earthquakes in caves. It's dropped mainly by Slurtles and Snurtles when they eat Stones, Flint, Gold, etc.

The slime can be farmed by luring the Snurtles or Slurtles with a container on the ground containing a bunch of mineral items. The critters will stick around to eat the rocks and produce slime. Building Walls can keep them in one place.

Ranching is the farming of animals such as Butterflies, Pigs, Rabbits, and Beefalo. Generally, ranching can only be done with animals that can respawn. Each type of animal requires its own way of ranching.

Butterfly farms can be produced by catching butterflies in a Bug Net. Once captured, they can be planted as Flowers anywhere. Flowers require no maintenance and can spawn additional Butterflies as soon as they are planted. When the Butterfly population is high enough, they can be killed for their Wings or Butter. Butterflies will spawn in all seasons except for Winter. As with most farms, building a Lightning Rod should be the only necessary defense.

One can plant Butterflies that are caught near Beefalo herds. The Beefalo will attack any Butterflies that spawn from Flowers during their mating season. Any items that the Butterflies drop can be safely collected while wearing a Beefalo Hat.

Another way to farm butterflies, exclusive to Don't Starve Together, is to plant a Flower near Magma. The spawning butterflies will die due to the fire damage. However this method is risky if the Dragonfly is nearby.

In Shipwrecked DLC, planting flowers around an Elephant Cactus will make for an efficient and resource-friendly butterfly farm. Players will need to wear a Cactus Armor to be able to harvest the drops safely.

Catcoon may be farmed for its gifts. This can be done by creating an enclosed wall around a Catcoon and flowers. Catcoon will use the butterflies from the flowers to spit out gifts.

Bees and Honey can be farmed by building Bee Boxes near a flower field.

A Bee Box will spawn a Bee every 2 minutes, up to a maximum of 4. If any of these Bees are caught or killed, another one will spawn after the 2-minute cooldown. The Bees can be caught with a Bug Net and then be either murdered for Stingers and Honey or used to make Bee Mines. If a Bee is caught, all Bees still inside its box will become Killer Bees and attack the player, and homeless Bees outside will often join them.

When Bees successfully visit 6 Flowers, they will return to their box and increase the amount of Honey contained in it by 1, up to a maximum of 6. Honey can then be harvested at the Bee Box, but the Bees inside the box will come out as hostile regular Bees. A Beekeeper Hat is advised to tank the damage, or the player can just run away until the Bees lose interest. Harvesting Honey while all 4 Bees are outside the box will result in no bees attacking. If the player wanders too far away from the Bee Boxes, the game will hibernate the boxes and decrease the speed at which Honey is produced by several times.

Bee Boxes are dormant in Winter: Bees don't leave their homes, and the Honey stays on the boxes until the player gathers it. Gathering honey this way during winter is easier, since the bees do not come out to attack when the player collects their honey. The game's hibernation system actually assists the player in winter, as Bee Boxes far enough from the player will still produce honey at hibernation rates regardless of the bees' lack of activity.

Pigs spawn from Pig Houses. Each house will spawn one Pig at a time. If the Pig dies, another will respawn after 4 days. Pigs sometimes drop Pig Skin when killed, which is required to make additional Pig Houses. Pigs can be convinced to fight and chop trees for the player by giving them meats, and they produce Manure when fed vegetables.

Pigs left outside during a full moon will transform into Werepigs, and become hostile towards everything. Feeding a Pig 4 pieces of Monster Foods (

) will automatically transform it into a Werepig. They drop 2 Meat and 1 Pig Skin when killed. Werepigs will quickly eat any food lying on the ground. Normal Pigs in the area will not target the player attacking a Werepig, making them a good option for farming regular meat.

Bunnymen are the Cave counterparts of Pigs. They spawn from Rabbit Hutches and function similar to Pigs, but several traits make them more difficult to recruit and use as allies. They're suited for nocturnal protection at which Pigs fail and can be used to farm Spiders. Their Bunny Puffs can be used to make a Fur Roll or more Rabbit Hutches.

Beefalo can be brought to a desired location with the use of a Beefalo Horn and a pen made of Walls. Wearing a Beefalo Hat will protect the player from aggressive Beefalo during mating season.

A way to create more beefalo herds is that find any Baby Beefalo or Teen Beefalo who has not yet grown up, and deport it to the an location you want, maintain before nightfall do not let it return to the original group, and it will sleep on the spot at night, players must build the wall around it at this timmer (also use Wood Fence in Don't Starve Together), when it grows up, it will use it as its own territory, you can free it, it will start to increase the number of Beefalo after the next estrus.

Spiders spawn from Spider Dens, objects that may be spawned by planting Spider Eggs. Spider Eggs can be obtained by killing a Spider Queen or destroying a tier 3 den. The higher the tier of the den, the more Spiders and Spider Warriors spawn from it. Spiders, when killed, will drop either Monster Meat, Silk or Spider Glands.

A simple method to farm spider drops is by placing Traps near the den. Step on the Sticky Webbing to get the spiders to come out, then lead them to the Traps. Repeat until the den is empty. It is a simple but time-consuming method.

The player may build Pig Houses or Rabbit Hutches around the den to kill stray Spiders, but surviving Pigs will eat Monster Meat on sight (possibly turning into Werepigs) and Bunnymen will attack a player gathering Monster Meat.

(Not to be confused with Bunnymen) A good spot to farm Rabbits would be an area with at least three Rabbit Holes near each other. Place Traps directly on top of the Rabbit Hole, so when the Rabbit comes out, it will instantly be trapped. Rarely, the Rabbit may trigger the Trap without being caught. The best time to check traps is before dusk. Rabbits will hibernate during Spring, but caved-in Rabbit Holes can be dug up with a Shovel. This will disrupt hibernating Rabbits, making it possible to trap them. However this approach will destroy the Rabbit Hole, preventing more Rabbits to spawn from it.

Captured rabbits may also be relocated to a penned-in area for later slaughter. Simply drop the rabbit from your inventory in the pen while it is still alive. Since the rabbit holes will spawn new rabbits periodically (even if the original is still alive somewhere), this is a good way to stockpile food for Winter.