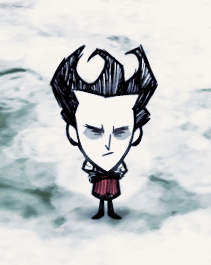 Wilson shivering from the cold.

“I am chilled to the bone.”

“The ambient temperature is low.”

Freezing is a game mechanic which makes surviving Winter more difficult. Freezing can also occur during the last night of Autumn or during heavy rainfall in Spring, in Don't Starve: Reign of Giants. Whenever the player is away from a heat source for too long they will begin to freeze.

Freezing occurs when body temperature drops below 5° for vanilla or 10° for Reign of Giants. The edges of the screen will become encrusted with ice, as a warning to the player that they are about to freeze. The player should seek a heat source as soon as possible when this happens. If a source of heat cannot be found, a second layer of ice crust will form over the edges when body temperature drops below 0°, causing the player to take damage of 1.25 Health per second. Freezing stops soon after the player finds a sufficient heat source.

The drop in body temperature that results from Freezing can be slowed by carrying a charged Thermal Stone, wearing insulated Clothing, growing a Beard or equipping a Torch. Freezing is negated altogether near a sufficiently warm heat source, such as a Fire. 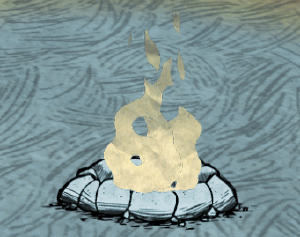 The best way to have a reliable and steady source of fire is by having a Campfire, Fire Pit or a Dwarf Star. A Torch won't provide much warmth but can buy a limited amount of time before freezing actually settles in.

In emergencies, objects and even creatures can also be set on fire for an immediate source of warmth. A single flammable item can be dropped on the ground by holding the CTRL key and clicking the LMB. Once on the ground, such items can be lit on fire with a Torch to provide a small, but limited, amount of heat. With enough fuel, small fires like this can provide enough warmth to get to a better source of heat. This might be dangerous (or advantageous) however as nearby flammable objects can catch fire as well.

One of the best options for traveling away from a fire during Winter is to wear clothing that provides insulation. These items increase the amount of time a character can be away from fire before Freezing begins. Having several items equipped at the same time provides a cumulative bonus. Insulated clothing only delays Freezing, however, and sooner or later the player will be forced to return to a source of warmth. There are three tiers of clothing, each allowing the player to be away from a fire longer than the lower tiers.

Freezing mechanics are based on the temperature implementations in the game. A player character has a body temperature, which ranges from -20° to 45° (80° in Reign of Giants). Any time body temperature falls below 0°, the character will take 1.25 damage per second.

This rate can be any value between +5 and -1. It is given by the function:

This rate takes into account the total effect of all heat sources affecting the player, including weather (the current air temperature), campfires, Thermal Stones, and lit torches. It is also a function of the player's current temperature.

In other words, the net temperature effect for each source is given by the equation:

The final equation for calculating Ambient Delta is given here:

Insulation only becomes a factor if the ambient delta is less than 0 (i.e. all ambient heat carried and in the environment is still colder than the player's body temperature), in which case it operates per the ambient delta formula above. Insulation provides steadily less and less protection from cold, so the first item worn makes the biggest difference by far.

The warmest combination is a Puffy Vest, Beefalo Hat and fully grown beard (if playing as Wilson). This will add up to a whopping 615 points of insulation and would take 16.67 real time minutes to freeze (with a fully charged Thermal Stone). With a fully charged Thermal Stone and a Torch equipped, it is possible to have a mobile heat source almost as hot as a stage 1 Campfire.