“Stupid bird! Stay away from my berries!”

“Evil bird! Get away from my yummy berries!”

“Dumb bird is take all berries!”

“Dumb bird! Stay away from my berries!”

“THAT IS AN UNUSUALLY LARGE BIRD”

“Nasty Meleagris, stay away from my berries!”

“More birds! Why is it always birds?”

“It is addicted to fermented berries.”

“A fellow with excellent taste.”

Gobblers are passive Mobs that feed on Berries and all Fruits and Vegetables, including Mandrakes. They spawn by jumping out of Berry Bushes. There is a 10% chance after picking a Berry Bush that a Gobbler will spawn; this includes underground bushes. Gobblers drop two Drumsticks when killed.

Gobblers will run toward and attempt to eat from any nearby unharvested Berry Bushes as well as any dropped Fruits or Vegetables. They can quickly devastate berry farms if the bushes are not protected. Gobblers will eat picked Mushroom caps, but will not eat Mushrooms that are still in the ground. They will eat Mandrakes whether the Mandrakes are still planted or following the player. After eating a Mandrake, the Gobbler will fall asleep. The Gobbler has no eating limit and will consume as much Food as possible until killed.

Gobblers will run away when approached by the player or certain mobs. They are much faster than the player, making them nearly impossible to kill with a melee weapon unless cornered. When left alone, they will slowly wander around searching for food. During dusk and night, Gobblers will panic and run to a nearby Berry Bush (or Coffee Plant if brought from a Shipwrecked world) for cover to sleep. If, after a certain amount of time, the Gobbler doesn't find cover, they will go to sleep on the ground, though it will wake up if attacked or if a mob comes too close.

Gobblers will continue to spawn at dusk or night, but they will run straight to a bush to hide in instead of eating anything. Because of this, it is advised to harvest berries during this time. 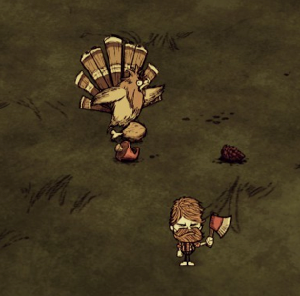 Gobblers will eat most vegetable and fruit food items (like Carrots, Corn, or Berries) left on the ground. When such food is placed near a Gobbler, it will slowly approach the food while completely ignoring the player. As long as the Gobbler doesn't make it to the bait before being attacked, it will not flee like normal. If it reaches the bait, the Gobbler will eat it instantly and begin fleeing again.

Gobblers are not picky and will also eat poisonous Red Mushrooms left on the ground. If the Gobbler eats three, it will die as Red Mushrooms reduce Health by 20 points when eaten.

Gobblers can be killed by the Boomerang in 2 hits by most characters. Wendy, Wes, and hungry Wolfgang will take 3 hits and Mighty Form Wolfgang will kill a Gobbler with a single boomerang hit. After the first hit, Gobblers will not run away; this makes Gobblers easy targets for a second (and third) strike.

Placing Tooth Traps close to Berry Bushes will allow for the farming of both Berries and Drumsticks. With the right camera orientation (with the player standing in front of the bush), Tooth Traps can be placed directly underneath Berry Bushes, causing any spawned Gobbler to land on top of and trigger the trap, dying instantly. Adding walls around the farm will help to keep Gobblers from escaping. Gobblers can also be chased into Tooth Traps if they escape. This makes Tooth Traps an essential element of any berry farm.

Alternatively, a Houndius Shootius turret can be utilized to farm Gobblers next to a patch of Berry Bushes. The turret deals enough damage to kill the Gobbler in one hit, although the player must target the Gobbler to be attacked for the Houndius Shootius to do so too. This is a good method of farming Gobblers for late-game bases without the use of Boomerangs, Tooth Traps, or any other weapon. This method is particularly effective when used with a very large berry bush farm (50+ bushes) as the player can collect 10 or more Drumsticks every few days simply from harvesting the berry bushes.

If none of these options are available, Gobblers can be chased into confined areas such as walled pens where they will be forced into the range of melee weapons or into either wild Marshes where they can be finished off by the resident Tentacles or towards a pond where a group of Frogs are wandering around. Due to their aggressive nature, the frogs will immediately attack the Gobblers. Gobblers take four hits to be killed by Frogs and, as with ranged weapons, Gobblers do not respond when attacked by frogs. One should beware of angering any Frogs when collecting loot. If the frogs are too much of a problem, the player could simply wait until dusk when the frogs retreat to their pond to pick up the drops.

Gobblers can be hunted at night if they did not despawn at a Berry Bush. It should be noted, however, that they will wake up and run away after a single melee strike. This makes landing the second melee strike difficult if one isn't using a Tentacle Spike or similarly powerful weapon.

If all else fails, one can corner the Gobbler at the edges of the island where the ocean meets the land or at a gap in the land where there is water. This solution is not always efficient as Gobblers that are killed near edges of the land may drop their Drumsticks into the ocean, losing them permanently. In rare occasions, these drumsticks will drop out of the players reach, floating above the ocean and attracting various carnivorous monsters until it rots. The only real way to fix this bug is to set the drumstick on fire with a large fire or a Fire Staff.

Below is the number of hits it takes with each weapon to kill Gobblers when playing with characters with a default damage modifier. The Weather Pain is not included due to the random nature of its projectile.

Gobblers take two hits from the Ice Staff to be frozen and one Sleep Dart to be put to sleep.