Finding A Camp And Building It

Pre-camp exploration is key to knowing where to go to get different resources and where to set up camp. It is a good idea to set camp on the corner of as many Biomes as possible. This will make finding and obtaining materials and different foods easier than being in the centre of a Biome. Also, it will be convenient to make camp near Beefalos or Pigs for Manure. This will make food creation easy and will mean that the player will need to worry less about starving. Consider focusing more on beefalo since pigmen can be relocated later. In addition, enemies, such as Hounds, can be drawn to them in case one is not prepared when they hear warning signs of their approach.

For long-term survival, the key part of camp location is considering resource pools that cannot be relocated. Examples of such resources are Reeds, Cacti, rabbit holes, Pig King and beefalo. Keep in mind that being close to non-renewable resources, such as boulders, are not as vital as being close to harvest points that re-spawn. If non-relocatable resources are far away from a base camp, consider building an outpost near that location that can be used during resource trips or build the base near a Worm Hole that is close to the resource needed.

However, Forest, Swamp, and Rockyland Biomes are notably difficult to set a base in.

The player should choose wisely before setting a Fire Pit, Science Machine or other utilities of this nature, for they are hard and counter productive to remove once placed.

If a location has been chosen near an Ocean, place the fire pit just inland from the ocean to give yourself room for important items. 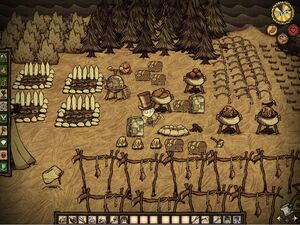 Example of Base Camp

Before winter comes you may want to set up a food source that will last. While farms and traps are good to stockpile, there are ways to collect food passively.

1. If you've settled near, or built a Pigman village at your base, a good idea is to place a spider nest close to the pig houses. This will make a perpetual monster meat or meat farm (depending on which side is winning). Monster meat can be cooked and fed to a bird in a birdcage. The bird will drop an egg which can be a great source of food; monster meat can also be used as a filler in Crock Pot recipes.

NOTE: Make sure to have enough pig houses because as the spider nest grows, the pigs could be overrun.You will also need to stand ready to pick up whichever meat drops, as pigs will eat monster meat and spiders will eat meat. Moreover, take caution as a Pigman that has eaten 4 Monster Meats will transform into a Werepig (will transform back into a normal Pig after 4 game hours).

2. Place rabbit traps directly on top of Rabbit Holes. No bait is needed. Stop by once in a while and there will be a Rabbit caught in the trap. Stagger Rabbit murders to allow the Naughtiness meter to decrease in between kills. 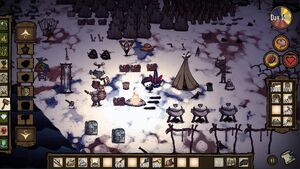 If all goes well, this is how your base camp could look like come winter!

Forest: The only truly sustainable forms of Meat/Morsels will be Pigs, Rabbits and occasionally Redbirds/Crows. And on occasions roaming Beefalo from nearby grasslands.

Swamp: They can have a plentiful source of Monster Meat, Fish, and Frog Legs, but are very dangerous because they house the Tentacles, Merms, Spiders (later Spider Queens) and Mosquitoes. With the aid of a Crock Pot, the foods available are an invaluable resource in replenishing hunger. If you are thinking about setting up your camp for a more challenging playthrough or just in general, the Marsh Camp Guide can help you out.

Savanna: Arguably the second best biome for food because there are Rabbits and Beefalo roaming about. Beefalo are difficult to kill but with a bit of kiting and very minimalistic materials (i.e. enough to build a spear) they can be reliable food sources. Beefalo (if you obtain a Beefalo Hat) can also serve as extra protection against hostile creatures.

Grasslands: The least threatening biome, and home to the most plentiful food source, The biome includes plenty of Grass and Saplings which are key components in building Traps. Traps set up at the mouth of a Rabbit Hole, without bait, will grant a steady income of Morsels, and the traps can be utilized more than once per day with a reliable yield of approximately 10-30 Morsels per day (assuming multiple Traps are placed and harvested regularly).

Desert: Like the Swamp, this appears to many as a relatively inhospitable biome, due to the Hound Mounds that may litter the place. However, due to the abundance of Buzzards, Cacti, Tumbleweeds, Boulders and Volt Goats, this is surprisingly one of the best biomes to take shelter in the Reign Of Giants DLC. The Hounds can be farmed for their Hound's Teeth and their Monster Meat can be used to bait Buzzards for their Morsels, Drumsticks and Feathers. Tumbleweeds can provide Cut Grass and Twigs all year round as well as contain other rare treasures if the player is lucky. The Boulders will provide the player with much needed minerals, though the Nitre and Gold containing Boulders are only situated near Hound Mounds. The Cacti are a good source of Cactus Flesh and during Summer, Cactus Flowers, which can be used to make Floral Shirts And Flower Salads, and since Cacti are unaffected by cold during Winter, Cactus Flesh can be used in lieu of farmed Vegetables. Lastly, Volt Goats can be used to get Meat and Volt Goat Horns as well as Electric Milk when charged by lightning or Morning Stars, and since they can breed like Beefalo, they are renewable as long as the player keeps at least two of them alive.

Deciduous Forest: An abundant source of mushrooms. If there is a Pig King in your world, they will always spawn right next to the deciduous forest, making Gold easy to obtain. Due to this, the nearby Pigs will be a sustainable source of Meat. In addition to pigs, Catcoons give you an easy 1 Meat and/or Cat Tails. you can chop down the over-abundance of Birchnut Trees for Logs, Birchnuts, Living Logs, and kill the Birchnutters that spawn for Twigs.