The first rule of Don't Starve is that you cannot survive forever. You will die from something sooner or later. This guide strives to help you to die later.

Collect grass, twigs, and some flint. As soon as you have your first flint, fashion an axe. Before nightfall, you should have chopped a tree or three. Pick up more grass and twigs (at least five each), also pick any berries and pluck all carrots you happen to come across. Also try pick some flowers. Don't stop just because it's getting dark! You can keep at it well into dusk.

When dusk turns into night, you'll need three grass and two logs to make a fire. Pile on another log, or (at most) two, that will be sufficient to last you until dawn. Time to cook and eat some food (pick it from your inventory and hold it over the fire). Craft a pickaxe. If your light shines far enough, you may chop down trees or mine a rock.

The next five (or fifteen) days

Eventually, you will want to settle down and establish a base camp somewhere. But first, get your bearings. Doubly so if you are a new player. It's easier to learn while exploring, and less frustrating to die before you have settled down and put a lot of effort into building a home. In your first games, you'll not only uncover the map, you discover the game. It is full of surprises, you'll meet lots of unfamiliar creatures and even ones that look familiar may be more dangerous than they seem. Your first few games will probably end in an early and (in hindsight) silly death—do not fear failure! Failure is data. Learn from your mistakes.

A good approach is to walk along the shoreline, that way you will uncover the outline of the map and will get a good idea of the lay of the land, even though substantial black areas remain for now. Gather resources as you go, but keep going. You may occasionally even chose to walk through the night by torchlight, though most nights will be spent close to a campfire, cooking, eating, and either crafting or chopping a few trees or mining a rock; try to place the campfire in a place where you can keep busy during the night.

Cooking is important, by the way: most foods will be more nourishing and healthy (or at least less unhealthy) when cooked.

Other things you should do early

Pick a total of twelve flowers and fashion them into a garland. It looks silly, but will prevent you from going insane.

Your first Science Machine should be built once you have the necessary material and then some, probably on your third or fourth night. Make a backpack and a shovel, also learn how to make boards, rope, and cut stone. Don't worry too much about where you build the device; it is comparatively cheap and you can well build another, when you finally know where a good location will be.

You want to locate the Beefalo herd, the swamp, at least one place with a lot of rocks to mine, and the sweetwater ponds (the ones with frogs). If at all possible, also try to locate the Pig King.

What to collect and what to leave behind

While exploring, you will probably collect more stuff than you can carry, backpack notwithstanding. Try to save space by refining: when you want to set up your camp, you can make good use of ropes, cut stones and boards.

Make caches. By day five, you will have a good idea which parts of the map are more central, and which are way off at the edge. If you find yourself carrying too much, drop something on the ground on a reasonably accessible place, and mark the spot with a trap (traps show up on the map and can serve as ersatz signposts).

A comprehensive list of what to keep and what to stash would be a long discussion; knowing which is needed when comes with experience and is part of learning the game. But as a few rough rules of thumb: You will not need the cut stones or boards until you make camp; and generally, you don't need to carry more than one stack of anything. Any "rare" items that can only be used when you have time to learn new crafting skills should also be cached for now.

Settling in a Location

In the long run, you will need a lot of manure; that is, either a pig village or the beefalo herd should be within a day's reach. Preferably the beefalo, as these will help you through the first winter much better than pigs. Some meadows ripe with berry bushes shouldn't be too far away, either: berries will remain a staple food well into your next summer, and the less time you spend on gathering them, the more time you have to develop your camp.

Stay away from obvious dangers, and well away from walrus camps.

If you can site it so that you'll often walk past (but not through) the ponds, that's a huge bonus. Likewise, it will help a lot if the nearest spider den isn't too far away. The Pig King, however, doesn't need to be very close.

You'll need to burn down a suitable patch of forest for charcoal; try to have a full stack (40) before starting to work on your camp.

Base installations, in order of importance

(preparing for) Your First Winter

When winter arrives, days will be shorter, and the cold will force you to make a fire/ return to your camp before you can even complete a full days work, so if there's any longer trips that still need to be done, do them now. Collect berries, carrots and mushrooms as long as you still can, to supplement your meaty winter diet.

As plants don't (or barely) grow during winter, you'll have to kill animals for food. This can be problematic, as most beasts that don't attack you on sight are considered innocent, and killing them is a "naughty" deed.

If you kill too many innocent animals in a short time, this may trigger the appearance of Krampus, a monster that will steal your stuff, even breaking chests to get at their contents. If you try to stop it, you'll find that it can also deal a lot of damage. See the main article for a full lists of which animals are innocent and how many you may kill per day; for most playstyles, this shouldn't be a problem.

If the frog ponds aren't too far away, place several traps close to the ponds. Neither bait nor precise placement is necessary; if you check back every other day, you can expect that half of the traps will have a frog inside. You'll quickly figure out that there's some spots that work better than others; move traps around as needed.

If you have silk to spare, make a fishing rod or two. There will be a day without frogs; spend that day fishing. You only have one day of unmolested fishing before the ponds freeze over. That day may pass without you becoming aware of it, but if you do notice an absence of frogs, by all means use it. Two fishing rods should provide for at least ten fish, possibly fifteen.

Bird traps require four spider silk to craft; that's a bit steep for an everyday source of food, but if you built a trap to populate a bird cage, you may as well keep setting it until it wears out. Birds also provide feathers, a useful ingredient in blow darts. You don't need many feathers, but it's good to have some.

As their name suggests, they are a great source of meat. When killed, they will drop 4 meat, Beefalo Wool & Beefalo Horn. The last two can be crafted into a Beefalo Hat which is the hat with the highest insulation factor - making the winter season slightly less deadly for the player.

Killing Beefalo is not that hard using the "Kiting" method which is basically hitting a target, then escaping its attack - repeatedly. Using this method, one can easily kill a Beefalo and remain unscathed. The Beefalo killing strategy is explained in length in the main article. Beefalo will go extinct if you kill off the entire herd, so don't overdo it.

Finally, Beefalo will periodically drop manure, which is a necessary material to make farms; you want lots of manure by the time spring comes around. You also need manure if you want to resettle berry bushes or grass tufts, and your farms will regularly require a fresh load of manure to keep working. In short: manure is vital. It also makes good fuel, by the way. You probably don't want to burn manure if you have other options, at least not in your first winter, but keep in mind that it will burn just as long and as brightly as a wooden log. 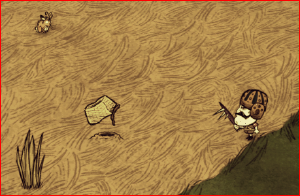 Some traps placed close to (preferably on top of) rabbit holes will be a source of easy meat. You may also fashion warm earmuffs from two rabbits and some twigs. Earmuffs are nowhere as good as a beefalo hat, but easily made and much better than nothing.

Later on, you can use this method to "farm" for Nightmare Fuel and Beard Hair, by killing the rabbits (beardlings) while using Nightmare Amulet.

Your need for spider silk will make it necessary to trap and/or fight spiders; probably more often than you're comfortable with. Apart from the coveted silk, you'll also gain lots of monster meat, which is nourishing but unhealthy. A crock pot will allow small amounts of monster meat and still produce wholesome food. If you also have a birdcage, monster meat may even become the mainstay of your food supply without ill side effects. 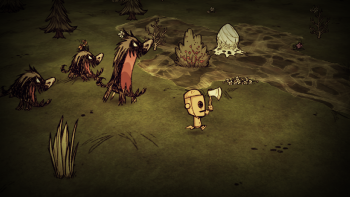 Hounds are monsters that attack in waves, approximately every 3–12 days. They are extremely dangerous without adequate preparation. Hounds cannot be outrun unless they are being distracted. If the player passes by other mobs, the hounds will usually turn to attack the other mobs.

Hounds might be a big problem sometimes, especially when spawned at night when the player has to run away from the campfire / fire pit.

For such cases, you should prepare a torch when you hear them coming,

Beefalos can kill Hounds quickly, although some of them will die if the wave is too large.

In conclusion, if you follow this guide, by day 15 you will have a good start.

This is my first Guide,

Any comments and notes will be appreciated.

Good luck and have fun!