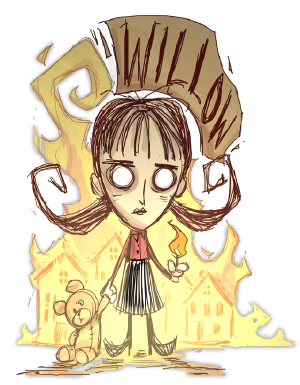 Willow is  considered a "beginner/intermediate" character due to the nature of her special item. This is why she is the first unlockable character.

She is meant to help new players that may have trouble adapting to the Light mechanics of Don't Starve. Players that are unaware of the necessity to gather Logs and Cut Grass during the first Day-Night Cycle in order to survive the Grue will be granted access to Willow after surviving a cumulative total of only 8 days as Wilson.

When more experienced players plan for a day of scavenging away from their camp, they will bring ample Logs and Cut Grass, or ensure they bring an Axe so a Campfire can be made to survive the night without relying on Willow's special lighter. However, her lighter is useful to get back to camp if you're close enough to make it back without wasting resources.

Willow's immunity to Fire damage is negligible at best. The reason is twofold:

When a player is standing in Fire, there is a built in 1-2 second delay before damage is actually calculated. The screen will glow with flames on the bottom providing a visual cue to move in order to avoid damage. Even while standing in flames for extended periods, the damage is still negligible if even one piece of Armor is  worn. Fire simply isn't a threat for the majority of the game. Unless the player is  immersed in heavy Forest while it is burning, avoiding fire damage is trivial. Spiders, Tentacles, Hounds, and Killer Bees all provide greater threats to the player on the higher survival days than Fire does. It is  almost never an obstacle to the player, and when it is, it is almost always subject to an uncommon circumstance, making Willow's Fire immunity bonus situational at best. One advantage to her Fire immunity is that when a lightning strike near the player in an area with combustible objects; the player won't have to worry about any damage. Again, lightning is unpredictable and this advantage also falls under situational.

Willow will be of the most use when the player is caught in Night with no source of light, and no way of making any. This can happen for several reasons, like when Night Hands begin stealing the flames of the player's campfire, if Frogs remove the items necessary to make a fire from the player's inventory, or if the player forgets to plan for it. During these circumstances, Willow's lighter will be an advantage. These situations are  circumstantial and usually only apply to newer players that haven't quite experienced every threat in the game.

While playing as her, make sure to watch her sanity. If it hits 60 or below, she might start a fire at her feet, which could burn up any nearby flammable items.

Although Willow is regarded as a beginner character, there are some unique strategies she can pull off. Willow can provide probably the most efficient start as of The End of the Beginning update, second only to Wickerbottom as her lighter allows her to travel at night . She is capable of scavenging resources all night, foraging for Blue Mushrooms and gives her an advantage for shaving Beefalo with a Razor. She also has a higher exploration potential and resource gathering, which could be considered the most important things to do during the first 10 days. Willow can make for a very strong start since there is little productivity lost at night with her.

Willow also can restore sanity by standing next to a fire, even during the night. This is a way for the player to stay sane.

During the winter, Willow's lighter and immunity to fire allow her to light almost anything on fire and stand right next to it until it burns out. Though this isn't the most efficient use of resources due to the short burn times of most things, it's much faster than building a campfire and doesn't require specific items (except the lighter or a torch). Willow is less dependent on insulation and better able to explore during the winter, compared to most characters. While using her lighter to warm her up, make sure whatever you're lighting isn't too close to other burnable resources. It isn't hard to accidently start a large fire this way, so be careful if you aren't used to this method.

The lighter allows Willow to survive exploring caves with much less preparation than any other character.

For the players looking for a challenge in the "Lights Out" preset (found in the world options while setting up a new game), Willow's lighter is invaluble because the amount of resources used to craft torches while exploring is enormous; one can go through about 20 of each sticks and grass per day on torches alone, because resources cannot be used for other items like a backpack at the start of the game. The lighter will also reduce the constant sanity loss. The player can take advantage of fires by making use of the light to chop trees and mine boulders and getting a sanity increase while at it.