When first starting out, finding Pigs or Beefalos can be difficult. Players may not get enough Manure for Farming and food collection. A second option is to establish a base camp near a frog pond area. Frogs can be killed with the basic trap just like rabbits but they have several advantages: 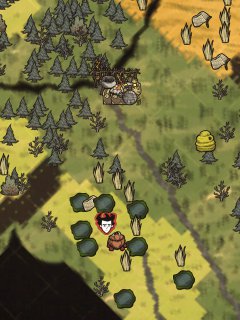 Search for Ponds in the Grassland biome. Ponds will show on the map as light blue water circles with a green border. The Mosquito Pond is a similar shape, but purple, and are found in the Marsh Biome. There is usually a Cobblestone Road crossing the grasslands with many ponds close together so following a cobblestone road when exploring might be a good idea. An ideal location has more than one pond, as a single pond won't spawn enough frogs to support a player through winter.

Once a suitable location is found, camp should be set up a small distance away from the ponds to keep frogs from attacking players during the day. Twigs and grass supplies will be useful for crafting Traps and Drying Racks. Drying Racks are important because they allow players to turn excess frog legs into jerky, providing a stable food source for winter. Ideally, at least 3 Drying Racks should be utilized for this camp setup. Finally, crafting a Crock Pot will allow players to cook better food like Froggle Bunwich by placing Frog Legs into the pot.

Catching Frogs is quite easy but a Log Suit will help with taking the occasional hit. The best way to catch them is to observe the direction they hop and place a trap right in front of them. They aren't very quick to react to the player and usually just continue hopping into the Trap, if they do become aggressive they can still be kited into it. If there are enough frogs in close proximity the player can hunt with several traps at once, grabbing caught frogs and resetting traps constantly. One trap will catch 8 frogs before breaking, exhausting two or three should be no problem during the day. At dusk frogs will return to their ponds giving the player some time to fish risk free if a fishing rod is available.

As of the The End of the Beginning update (April 19, 2013) frogs have become quicker and more aggressive when chasing the player. They also jump farther, allowing them to sometimes jump over traps without triggering them. This makes frog hunting slightly riskier and kiting them more difficult.

Since you want to be ready for Winter, try to increase the number of Drying Racks to about 8 but you can build as many as you can keep stocked. The goal is to catch enough frogs in one day so that you have enough to eat and dry for the next two. This way you can alternate between catching frogs and exploring for more resources. Try to plant some Saplings around your camp so you have a reliable source of twigs. Adding a lightning rod helps keep your saplings and near by trees from burning. Also if you find spiders you should hunt for Silk since Fishing is a great addition to frog hunting. Just sit in between several traps while fishing and grab any frogs that get caught. Finally if you do find a source of Manure, you can still add some farms to your camp or wait until the winter is over to relocate.

Frog Legs are very versatile when used in the crock pot. Four frog legs will produce Meatballs which provides 62.5 hunger points. Frog Legs can be combined with Vegetables to produce a Froggle Bunwich which restores Health. Finally, if you can get a fishing rod, Fishsticks are an even better source of health. In addition, if you have a Bee Box any combination of Honey and Frog Legs makes Honey Nuggets.