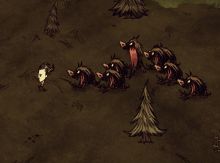 Hound attacks can be very dangerous for players caught off-guard. Without proper defense and offense, one can easily be overwhelmed, and without a solid backup, the world will be lost. This instructional page will provide basic and advanced tactics to help players survive a Hound Wave.

There are several warnings that occur when a Hound attack is imminent.

On default settings, the first attack will consist of 2 Hounds and you will have 2 minutes before the Hounds appear. Hound attacks will not occur until at least Day 6.

Once you hear these warnings, you should begin to prepare. There are several ways to fight hounds depending on your base camp location, nearby monsters, and biome.

Later attacks will have more hounds, shorter warning periods, and occur more frequently. A table of spawning times, numbers, and chances of Red Hounds or Blue Hounds spawning can be found here.

Now that you are prepared to face them, it is important that you know what to do.

If you survived, congratulations. Hopefully you managed to obtain some Hound's Teeth. Those will help you in the future via Blow Darts and especially the Tooth Traps that can be used to help in future Hound attacks.