There are three different types of Mushrooms. Some Mushrooms give extra sanity/health when eaten. 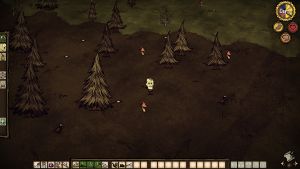 Red Mushrooms can be found in Grassland or Forest biomes and can be easily identified by their red cap. They are only harvestable during Daytime, during night and dusk they will bury themselves underground. 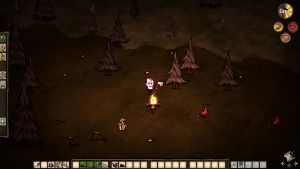 Green Mushrooms can be found in Forests, Savannas and Marshes and can be easily identified by their green caps. They are only harvestable during Dusk; during Day and Night they will bury themselves underground. 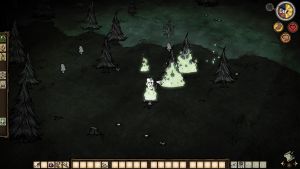 Blue Mushrooms can be found in Forests and Marshes and can be easily identified by their blue caps. They are only harvestable during Night; during Day and Dusk they will bury themselves underground. 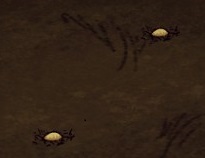 Mushtrees are organisms that can only be found in Caves or during the full moon on the surface in Reign of Giants. Mushtrees are, as their name indicates, a mixture between Mushrooms and Trees. Unlike "normal" mushrooms, Mushtrees cannot be picked or dug up, they have to be chopped down with an Axe. Upon being chopped they will drop the respective loot depending on which kind of Mushtree it was. Just like the mushrooms there are three types of Mushtrees; Red Mushtree, Green Mushtree, and Blue Mushtree. When a Mushtree is set on fire, it will burn to a crisp and then disappear dropping one Ash and one Charcoal. In addition to that all mushtrees provide light.

After being being chopped down the Red Mushtree will drop one Log and one Red Cap.

After being chopped down the Green Mushtree will drop one Log and one Green Cap.

The Blue Mushtree is the biggest Mushtree and will drop two logs and one Blue Cap.

Each mushroom has a positive and negative effect on all the characters, amounts depend on if it is cooked or not. Mushrooms are treated as vegetables and as such they fit in any recipe that requires them. Examples: