This is a survival guide written primarily for the Shipwrecked DLC, which introduces new gameplay mechanics and several other changes. Only techniques and strategies unique to Shipwrecked are discussed here. For players who have not played Don't Starve before, see this guide. 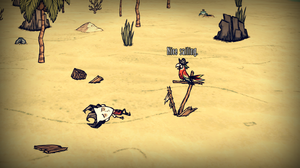 Wilson stranded on an island

One should play Don't Starve how they usually play for the first day or two - collect resources and food, Campfire

for the night, etc. The player will start on an island. Scout the island to get an idea of what resources are readily available, and what resources require a trip to a neighboring isle. Before building a Science Machine, build a primitive version of the backpack (called the Thatch Pack - 4 Palm Leaves) for more carrying capacity. 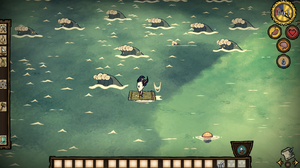 When the second or third day arrives and once the player has everything they should need, craft a Machete

tab, and the recipe is one Twigs

. Use the Machete to hack down some Bamboo Patches and Viney Bushes, which will drop what one needs for a Raft

Craft it from the

tab, and deploy the boat onto water and interact with it to start sailing. One can also find Seaweed

in shallow oceans, which is a semi-abundant and decent source of food early. When one reaches deep oceans, be sure to sail in the direction that the waves are facing, as doing so will provide a sailing speed boost. Be sure to avoid the waves though, as they'll reduce boat durability and increase wetness if touched, unless you sail over them correctly.

Once a suitable island is found (medium or bigger), with enough food to sustain oneself, with/without Ice Boxes

, place down the following:

Hurricane Season is the second season in Shipwrecked, and is equivalent to Winter, though, freezing is not an issue and plants will still grow normally. By default, Hurricane Season begins on day 21 and ends on day 37. Seagulls will visit land, unlike in other seasons, where they can only be found at sea. Hurricane Season's hazards are constant rain, strong winds (slows movement if they go against wind, pushes items and destroys walls), very frequent lightning (every 5–20 seconds), and the Sealnado.

It is advised not to go out sailing or island exploring during the night or even late into Hurricane Season, as the strong winds make any non-wind resistant light source (such as a Campfire) difficult to fuel sufficiently and there will be mostly only Big Waves. Hail also falls during Hurricane Season storms. As of the Eye of the Tiger Shark update, hail is no longer a valid Crock Pot filler, but it can still be kept in an Ice Box indefinitely, extinguish fires, or be refined into Ice

Monsoon Season is the third season in Shipwrecked, and is equivalent to Spring. By default, it begins on day 37 and ends on day 58 although by default, the rains won't start until day 41. Monsoon Season's hazards are heavy rain and flooding, although lightning is far less frequent and strong winds never occur.

Small puddles form in the beginning of the season and eventually become larger, covering land and inducing wetness, while the tides will also encroach, flooding island shorelines with water. Normal bees aggro towards the player and crab holes closeup for the season, while Poison Mosquitoes start to appear.

Dry Season is the fourth season in Shipwrecked and is equivalent to Summer. By default, it begins on day 58 and ends on day 74. Dry Season's hazards are overheating and constant volcanic eruptions, which launch falling meteors into the air, and flooded areas from Monsoon Season start to dry up. The player may trigger the season earlier by picking up the Volcano Staff

from the Volcano Staff set piece.

The player will get three warning tremors half of a day before an eruption. When an eruption occurs, meteors will rain down. They'll either destroy structures and set things on fire if on land or cause a ring of Big Waves to spawn from their origin point if they fall into the ocean. The world will fill with screen obscuring ash (which does go away eventually), which may make things difficult to see. The player will have a gap of one day between eruptions.

As the season goes on, the intensity of eruptions will increase. Meteors will fall every two seconds after one another, and two eruptions can occur in a row, especially during the very end of the season.