“Oh that I may crush the world.”

“It feels good to undo the work of others.”

“Smashing stuff *sounds* like work, but it's pretty fun.”

The Hammer is a Tool that can be used to demolish Structures. The Hammer requires 3 Rocks, 3 Twigs, and 2 Rope to craft and a Science Machine to prototype.

Hammers can break down any player-made Structures and most naturally occurring Structures such as Pig Houses, yielding at least 50% of the materials used to create the Structure in most cases.

If the player strikes a container such as a Chest or Crock Pot, all items within will fly out but remain undamaged. It also can be used on an Ancient Pseudoscience Station and Ornate Chest, both of which are found in the Ruins, to make random effects and objects appear.

In the Reign of Giants and Shipwrecked DLCs, the Hammer is tweaked so that it can be crafted without a device to prototype and requires 6 Cut Grass instead of 2 Rope to craft.

Skeletons and Bones can be hammered for Bone Shards, and hammering a Merm Head, a Pig Head, or a Wildbore Head during a Full Moon will yield Nightmare Fuel, as well as their usual items. The Hammer can also be used to "whack" Moleworms, which will stun them. 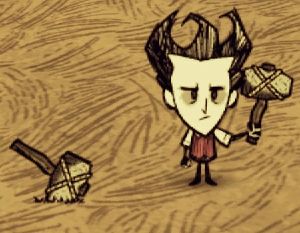 Hammer can be used to break down structures by equipping it then right-clicking a structure. After the first right click, left mouse button or space bar can be held down to continue hammering until the structure breaks.

The Hammer can be used as a weapon, dealing 17 damage per strike. It has 75 uses, meaning each use will reduce 1.33% of its durability, whether it was used as a weapon or to deconstruct objects.

Using the Hammer on a Structure that has "uses" (e.g. the Tent) may return less than 50% of the materials used to craft it, based on how many times the Structure has been used. For structures that have usage, the amount returned for each type of ingredient is:

Hammering a structure will always yield at least one of each of the crafting materials, with the exception of Walls, which drop their main component instead. If the main component of the Wall is a Refined item, its base components are dropped instead. For example, a Sign which requires 1 Boards to craft will drop 1 Boards when hammered, a Hay Wall crafted from Cut Grass and Twigs will only drop Cut Grass, and a Wood Wall crafted from Boards and Rope will only drop Logs. Light Tab Structures will drop Ashes in addition to their components.