“You ain't nothing, hound dog!”

“Stay back, foul minion of evil!”

“IT LIVES TO EAT”

“That hound is not domesticated.”

“They'd be good at pulling a sled.”

“They don't recognize me!”

Hounds are Monsters that attack periodically in packs. They attack every 3–13 days[1] and can also spawn from Hound Mounds. At least two Hounds will typically appear during an attack, which is signaled by growling noises heard for a short time. The player will also comment on the growling three times until it stops, and the Hounds attack. More Hounds will spawn at a time as the game progresses.

Hounds take two blasts from an Ice Staff to be frozen. When killed, they drop one Monster Meat and have a chance of dropping a Hound's Tooth.

In Don't Starve: Reign of Giants, if a player tracks a Varg, the Varg can spot the player and howl, calling two Hounds to help attack the player. Depending on the season, these Hounds can be normal, Blue, and Red.

In Don't Starve Together, a character that has died and became a Ghost can haunt a Hound, giving it a chance of becoming either a Red Hound or a Blue Hound (50/50 chance). After the Hound has converted, it will panic for a short while, before continuing with what it was doing, such as attacking other players.

“That one is glowy.”

“His disposition is fiery.”

“IT LIVES TO BURN”

“That hound is more dangerous than the others.”

“I put fire gems in there as a joke.”

“The flamed öne has nö mercy.”

“He's got a fire under his feet. And all inside him.”

“This one seems angrier somehow.”

“Stay beck from me legs!”

The Red Hound (also known as a Fire Hound, Flame Hound, or Hellhound) can spawn in the Summer and Autumn (

) during Hound attacks. Red Hounds have less health than regular Hounds, cannot be set on fire, and have a higher resistance to the effects of an Ice Staff. Upon death, they "explode" into 3 large fires that will burn for at least six seconds, then extinguish into Ashes. These fires can easily spread to nearby flammable objects. When killed, Red Hounds will always drop 1 Monster Meat and 1 Hound's Tooth, with a chance to drop 1 Red Gem.

Occasionally, players can encounter Red Hounds as part of a Fire Staff Trap. Four to five Red Hounds sleep around the Fire Staff, and if the Fire Staff is taken, they will wake up and attack. The player will lose a large amount of sanity, and it will start to rain. If encountered, it is better to kill off each Hound individually, as they will not awaken upon the assault of their brethren.

“Are there hounds for every season?”

“IT LIVES TO FREEZE”

“What a strange, cold beast.”

“How quickly they forget...”

“He has a chilling look in his eyes.”

“What a chilly pup.”

“Packs quite a chilly bite!”

) during Hound attacks. Blue Hounds have less health than regular Hounds, but deal more damage and cannot be frozen with the Ice Staff. When killed, Blue Hounds always drop 1 Monster Meat and 2 Hound's Teeth, with a chance to drop 1 Blue Gem.

Two Blue Hounds always accompany the MacTusk N' Son hunting party. They will be found sleeping outside the Walrus Camp when the party retires at dusk.

Occasionally, the player can encounter Blue Hounds as part of an Ice Staff Trap. Four to five Blue Hounds sleep around the Ice Staff, and if the Ice Staff is taken, they will wake up and attack. The player will lose a large amount of sanity, and it will start to rain. If encountered, it is better to kill off each Hound individually, as they will not awaken upon the assault of their brethren.

), while Blue Hounds accompany normal Hounds during Winter and Spring (

“Did you hear that?”

“The hounds are baying.”

“There's something out there.”

“The hounds are growing restless.”

“I recognize that sound. Hunger.”

Wes and Wilbur cannot speak and therefore do not have distinguishable warnings. Wilbur will make random monkey noises, as with any other quote. Attacks will escalate and peak at day 100. Periodic hound attacks are a threat in a Sandbox Mode. The default attacks escalate making them dangerous to fight alone.

After day 15, each normal Hound spawn can be replaced by Red Hound during Summer and Autumn (

), or Blue Hound during Winter and Spring (

Hounds do not appear in Caves. Instead, Depths Worms attack in waves similar to the way Hounds do above ground.

Hound attack frequency can be configured in the World Customization.

According to the script, the default hound attacks eventually escalate to "crazy" (settings as per the last entry in the Default settings table above).

Currently the only way to eventually get to a "crazy" level of hounds is to leave the hound attack setting on default. All other settings are constant (as described above). In other words, currently it is only possible to make the hounds easier in the long term (but more difficult early on), or to leave them as default.

Hounds are naturally aggressive, but easily distracted as they will attack all creatures on sight. Hounds will immediately charge the player when they spawn during a Hound attack. After a while, they can become distracted by nearby Mobs or Meat.

If a Hound's target is completely surrounded by Walls, they will attack the Walls in an attempt to reach their target. If there is breach in the Walls, Hounds will run through it.

In Reign of Giants, regular Hounds can spawn from Hound Mounds. These Hounds will only stray a certain distance from their Mound, but if they spot the player, they will chase them considerable distance. Hounds will retreat to their Mounds if they are unable to catch their prey.

See also: Hound Wave Survival Guide and Hound Repelling
Hounds are much faster than the player and cannot be outrun unless they become distracted or belong to a Hound Mound. The player can use a Walking Cane or run along a Road to outrun them.

One simple strategy to defeat Hounds, especially later in the game, is by simply filling up a large area with set of Tooth Traps. Players can simply equip armor, and then run around the trap field avoiding attacks until the Hounds are killed. The trap field should be built away from the base and other flammable structures, to avoid uncontrolled fires caused by Red Hounds. The broken traps can be replaced by using the teeth obtained from the Hounds, making this a self-sustaining method to deal with Hound attacks.

Hounds will bite as soon as they are close enough to the player and pause for a slight moment before and after they chomp. It is possible to dodge their bite and then strike twice during the pause, although this proves difficult when multiple Hounds are attacking. Wearing an item that slows the player, such as the Marble Suit, will greatly increase the chance of being bitten.

Once a Hound executes an attack, successful or not, it may stop to bark. When they do this, they will now target the nearest Mob or Meat. If they attack a Mob that fights in a group such as a Beefalo, they can quickly be dispatched.

Below is the number of hits it takes with each weapon to kill Hounds when playing with characters with a default damage modifier. The Weather Pain is not included due to the random nature of its projectile. 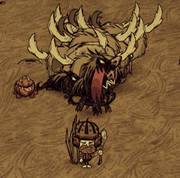 The Red Hound as a Steam chat emoticon.