“He's going after my stuff!”

“Hello, foul creature of the underworld.”

“It's a mythological holiday monster.”

“Give us back our things!”

Krampus (plural Krampi) is a neutral Monster that steals the player's stored items and items left on the ground. He will spawn if the player exceeds the naughtiness level, or "karma" rating, by killing "innocent" Animals with weapons or by murdering them in the inventory (see the Naughtiness section below). As the player gets closer to spawning Krampus, a hissing noise will be heard, warning the player every time innocent creatures are killed. The player will hear a unique piercing noise upon Krampus' spawn. Not acting "Naughty" for a while gradually decreases the naughtiness level. It takes 3 blasts from the Ice Staff to freeze Krampus and 1 shot from a Sleep Dart to put him to sleep. When killed, Krampus will drop any stolen items, two pieces of Charcoal, one Monster Meat, and, very rarely, his Krampus Sack (1% chance).

Krampus moves fairly fast and deals 50 damage per hit. He behaves similar to a Gobbler or MacTusk when approached. He will break Chests to steal items and will pick up most items lying on the ground in the player's vicinity, including Backpacks. He will keep running around the player until no more items exist on-screen, then disappear into his sack.

Krampus will not steal the Eye Bone, Lucy the Axe, Willow's Lighter, Abigail's Flower, Pile o' Balloons, Divining Rod, or Wooden Thing components, unless these items are inside a Backpack. 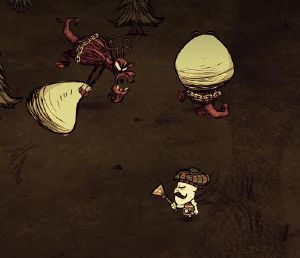 Two Krampii spawned at once. One is stealing an item with his sack.

Once the player reaches a threshold of naughtiness (a random number between 31 and 50), Krampus will spawn. One Krampus can spawn before day 50, two or three after day 50, and two, three or four after day 100 (see Bugs), all counts being equally likely. After Krampus appears, the naughtiness level is reset to 0.

Each minute of restraint (⅛ of a day) reduces naughtiness by 1, meaning the player can reduce their naughtiness by 8 points by not attacking an innocent creature for one day.

It is worth noting that setting creatures ablaze will not raise the player's naughtiness level. This is because the fire is considered to be the killing factor. The same goes for Tooth Traps, Bee Mines, Gunpowder, and Slurtle Slime, as they are all considered to be environmental damage. This is not to be confused with cooking creatures in a camp fire or fire pit which does increase the naughtiness of the player and can bring forth a Krampus visit.

Without adequate preparation, Krampus, especially when more than one spawns at the same time, could wreak havoc in players' bases. Players are advised to pay attention to the signs of naughtiness, and only summon Krampus when preparations are complete, away from important items and the player base. Krampus can be summoned by killing a number of passive creatures in quick succession. Rabbits can be collected with Traps then "murdered" in the inventory, Birds can be summoned using a Feather Hat, then either captured and murdered by Bird Traps or directly killed using a Boomerang. In Reign of Giants DLC, killing Glommer will immediately summon Krampi. In Shipwrecked DLC, killing seal form of Sealnado will also summon Krampi immediately. Shark Fin Soup adds 10 points of naughtiness, which can also be used to summon Krampi. Killing Doydoys adds progressively more naughtiness as there are fewer Doydoys in the world. Killing the last two Doydoys will guarantee a Krampus spawn each, however, this is not recommended as this makes it impossible to breed more Doydoys later.

Krampus' high melee damage and tendency to avoid the player makes him difficult to deal with using melee weapons. However, his low health make the ranged weapons, especially Blow Darts, effective. If melee is the only option, players should wear Armor and use high damage weapons such as a Dark Sword or Ham Bat to avoid significant health loss. He can also be put to sleep or frozen, to make him an easy target. Placing a number of easily obtainable item such as single pieces of Twigs, Cut Grass or Pine Cones will keep the Krampi occupied allowing the player to close in to the melee range.

Since Krampus is considered a monster, Pigs and Bunnymen are aggressive towards Krampus by default, so Pig Villages or Bunnymen Villages can be utilized to kill Krampus.

Summoning Krampus at night time will cause sleeping Krampi to spawn, making it easier to kill them using melee weapons.

Below is the number of hits it takes with each weapon to kill a Krampus when playing with characters with a default damage modifier. The Weather Pain is not included due to the random nature of its projectile.

It takes 3 blasts to freeze a Krampus with an Ice Staff and it takes 1 Sleep Dart to put it to sleep.

In Don't Starve Together, A New Reign update, a pair of Krampi can be summoned by Klaus during the fight.