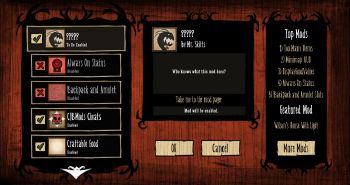 The mod on the mod page

The Lost Fragment is a mod made by Klei downloaded by clicking the film reel from this [page ]. This mod was a part of one of the William Carter Puzzles that reveal canon information about the character Maxwell.

Upon adding the mod to the Don't Starve folder and enabling it in the main menu, the player will be able to craft a special Magic Tab structure, the Shadow Portal.

On activation, a "Neat!" or "Nope" prompt will appear, similar to the one prompt that appears from activating Maxwell's Door.

The portal will send the player to a small island consisting of Spiky Trees and parts of a Chess biome floor.

Nearby is a Skull Chest that contains a Dark Sword and Night Armor.

Upon opening the chest, the player must battle a Shadow Maxwell that is equipped with his own Dark Sword and a special Telelocator Staff that is able to summon high-damage explosive meteors that can easily kill the player in one hit, should they go about unarmored. The shadow of each meteor shows where it is about to land, so it can be dodged.

Upon defeating waves of shadow Maxwells, the portal will reactivate, and interacting with it bring the player back to their current world, with all items intact. If the player sticks around after beating the arena, they can activate the special shadow Phonograph that will spawn. It will play Morse code when turned on, that when translated, says "exordium". Entering the password to [this page ] will redirect the player to [a hidden video webpage ].