For shadow monsters based on chess pieces in Don't Starve Together, see Shadow Pieces.

Sanity at a rate of -100/min., but killing one will restore a small amount of Sanity. Shadow Creatures drop Nightmare Fuel when killed.

Shadow Creatures will spawn as nearly transparent entities when the player's Sanity drops below 82.5%. As Sanity continues to drop, they become more "real" (less transparent) and will begin to attack a player with less than 15% Sanity. It's not unusual for 3 Shadow Creatures to spawn at the same time and attack the player when this happens. They cannot be examined and are visible only to the player, meaning followers can not help attack them.

The Crawling Horror is a large tick-like Shadow Creature, with many legs. It is the most common type of Shadow Creature and was originally believed to be the only type.

Crawling Nightmares are a version of Crawling Horrors encountered in the Ruins (and sometimes in Caves). They are able to attack the player, regardless of Sanity level. They can only spawn from Nightmare Lights/Fissures and do not restore Sanity when killed.

The Crawling Horror has a slower movement speed than the player and can easily be outrun in order to avoid confrontation. If outrun by a great distance, Crawling Nightmares will return to the Nightmare Light or Nightmare Fissure they spawned from. Crawling Horrors, on the other hand, will just materialize closer to the player, as long as their sanity remains low enough. 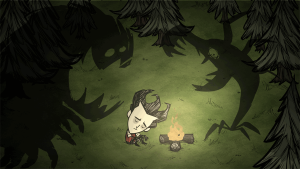 Official artwork of a Crawling Horror and Terrorbeak attacking Wilson.

The Terrorbeak is a Shadow Creature with an enormous beak and a slim body, with several small legs. It is not as common as the Crawling Horror, but will still attack the player.

Unlike Crawling Horrors, Terrorbeaks only spawn when the player's Sanity is below 15%. Their Sanity aura will further decrease the player's Sanity by -100/min. Terrorbeaks drop Nightmare Fuel and restore Sanity by 33 points when killed, which is enough to cause Shadow Creatures to become neutral again (even at 0 sanity) for characters with a maximum Sanity of 200 or less. Players can attack them most easily by trapping them on the coast or by hitting them with a Boomerang, or any other ranged weapon.

Nightmarebeaks are a version of Terrorbeaks encountered in the Ruins (and sometimes in Caves). They are able to attack the player, regardless of Sanity level. They can only spawn from Nightmare Lights/Fissures and do not restore Sanity when killed.

The Terrorbeak moves faster than the player - about as fast as a player with a Walking Cane - and cannot be outrun easily. If it is allowed to strike at the player, it will pause for a second to make a threatening animation which can be used to create some distance. If outrun by a great distance, Nightmarebeaks will return to the Nightmare Light or Nightmare Fissure they spawned from. Terrorbeaks, on the other hand, will just materialize closer to the player, as long as their sanity remains low. 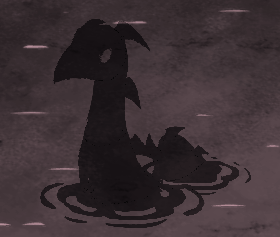 The Swimming Horror is a Shadow Creature found while sailing in the Shipwrecked DLC. It will spawn in the Shallow Ocean. When a player sails past a Swimming Horror, it will swim towards them and try to attack them. It will not give up chase unless the player leaves the Shallows or returns to land. 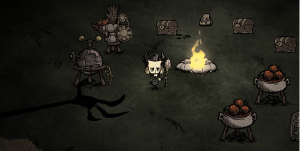 A Night Hand will attempt to snuff out Campfires and Fire Pits.

The Night Hand is a Shadow Creature that extend from the darkness in an attempt to extinguish the player's fire. It is always accompanied by the sound of a creepy music box. Up to 3 Night Hands can spawn at the same time.

A Night Hand will reduce the strength (or intensity) of a fire by 50%. The more hands that appear, the less damage they can do to a fire (1 Hand = <60% per hand. 3 Hands = <30% per hand). Night Hands have a Sanity aura of -40/min. When stepped on, a Night Hand will retract back into the darkness for a few seconds, after which it will make another attempt to extinguish the fire. If the player chases a Night Hand far enough into total darkness, it will permanently disappear.

When a fire is at its highest strength, it is unlikely for three hands to completely snuff it out. A potential tactic is to max the fire and stand near to max it out again after the attack, although this burns quite a few resources and does not get rid of the Night Hands. A second fire nearby, or a Miner Hat, "cancels" Night Hands altogether for the night. Placing Fireflies around the fire can completely prevent Night Hands from ever showing up.

If the player stokes their fire after the Night Hand appears, it is possible to see the "end" of the night hand. Forcing the Night Hand to retract until its wrist is touching its end will "kill" the Night Hand.

The Night Hand can be destroyed if a light source becomes bright enough, such as if a Night Hand appears when a fire is low and it is immediately stoked to full, or if the player puts on a pair of Moggles. 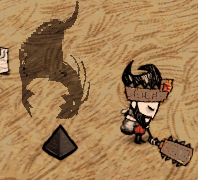 Mr. Skits flying into an Obelisk right before it changes.

Mr. Skits is a small, serpent-like Shadow Creature that can appear at any time while the player's Sanity is below 82.5%. He cannot attack or be attacked. When approached, he will turn and slither away, disappearing from the screen. His only purpose is to remind players of their Sanity level and provide a scare.

Mr. Skits will sometimes flicker on the screen for a fraction of a second, then disappear. He can also be seen flying into Obelisks as they are raised and flying back out of them when they are lowered.

He can also be seen coming out of chests in trapped set pieces and ornate chests when the player opens them, springing the trap.

Mr. Skittish is the Shipwrecked version of Mr. Skits and will only appear on sea.

The Shadow Watcher is a long, thin Shadow Creature that appears around light sources at night (including charged Lightning Rods) when the player's Sanity drops below 65%. It cannot attack or be attacked, and will disappear when a player stands on its eyes or when dawn breaks.

Besides just frightening the player at night, the purpose of a Shadow Watcher is unknown. However, there is a Shadow Watcher in the source code of the fourth and the sixth William Carter puzzle and one in the fourth puzzle's scene, possibly a hint to a connection between the two entities.

The Eyes are a Shadow Creature that appears in total darkness when the player's Sanity is below 80%. They do not affect the player in any way, and will disappear when approached. As the player loses Sanity, more Eyes will appear, with increased intensity. They will start out as small and round, eventually becoming large and menacing. Trees and other obstacles can block eyes, commonly forming a one-eyed Shadow Creature.

In Epilogue: Checkmate of Adventure Mode, Eyes will be visible in the darkness regardless of the player's Sanity.

Crawling Horrors, Terror Beaks and Swimming Horrors can attack the player, and the player can fight them. The basic tactic when fighting any of these shadow creatures is kiting them, by waiting for them to attack, dodging the attack then hitting them. Since they teleport away when damaged, the player won't be able to hit them more than once. However it is possible for them to teleport within the melee range, allowing the player to land a second hit.

Since they are only visible to the player, mobs cannot be recruited to defend against shadow creatures.

Below is the number of hits it takes (with a default damage modifier) to kill Shadow Creatures. The Weather Pain is not included due to the random nature of its projectile.