The Nightmare Cycle is a state of magical flux associated with the Ruins. Nightmare Lights (and Nightmare Fissures) open and close with the cycle, spawning hostile Shadow Creatures, regardless of the player's Sanity.

There are four phases of the Nightmare Cycle: the Calm Phase, Warning Phase, Nightmare Phase, and Dawn Phase. The entire cycle lasts 600 seconds (00:10:00).

Appearance of Runic Turf during the Calm Phase.

“Looks normal to me.”

“I know not what lurks in the shadow.”

“The levels of ectoplasmic residue seem to be at their lowest.”

“The heart of the city is still.”

“I can breathe easy.”

“It appears that all is well.” 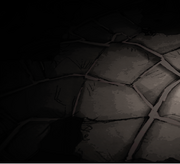 Appearance of Runic Turf during the Warning Phase.

“Getting pretty magical around here.”

“I can feel the prying eyes.”

“There are low, but increasing levels of vapors containing ectoplasmic residue.”

“This thing just turned on!”

“It beats once again.”

“Woah! Things are really heating up!”

“I feel some magic coming on!”

“I feel uneasy for some reason.” 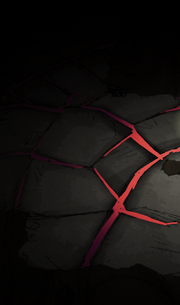 Appearance of Runic Turf during the Nightmare Phase

“I think it's becoming more concentrated!”

“The fuel is coming to life!”

“The bad light is here and getting stronger.”

“Levels of ectoplasmic residue seem to be increasing.”

“The pulse is quickening.”

“The magic is heightening!”

“It seems to be staying steady.”

“I think bad light not get stronger.”

“They're all around me!”

“LEVELS ARE HIGH AND MONOTONIC”

“The levels of ectoplasmic residue seem to be at their peak.”

“The pulse is holding steady.”

“I think it's keeping consistent.”

During the Nightmare Phase, Nightmare Fuel begins to seep from the eyes and mouths of Ancient Statues. If statues are mined during this stage, there is a chance for a Shadow Creature to spawn from them. Earthquakes occur most frequently during this state.

“I think it's turning off.”

“I think they're leaving.”

“THE CYCLE IS SUBSIDING”

“Levels of ectoplasmic residue are high but seem to be decreasing.”

“The pulse is waning.”

“Magic go down the hole.”

Appearance of Runic Turf during the Dawn Phase.

“The nightmare is almost gone!”

“I guess it's nearly over.”

“LEVELS ARE LOW AND DIMINISHING”

“It calms once more.”

“This nightmare is almost over!”

A Fissure in a Cave floor as the Nightmare Cycle leaks through.

The Nightmare Cycle can also leak through to the Caves, in the form of Nightmare Fissures (similar to those found in the Ruins starting area). Nightmare Fissures are cracks in the floor that open and close, spawning Shadow Creatures the same way Nightmare Lights do. They are surrounded by an aura of white light and emit a bright red light.

In A New Reign, the Atrium Biome will also have the Nightmare Cycle.

Upon inserting activating an Ancient Gateway, the Cycle will be locked at it's peak phase and will not change unless the Gateway is deactivated.