“Not quite what I expected.”

“What an intimidating chair.”

“It's less painful than it looks. Barely.”

“That throne makes our skin crawl.”

“Heavy is the bum that sits on the throne...”

“Not a seat me wants ta take.”

The Nightmare Throne is a throne only found in the epilogue of Adventure Mode. It is a black throne with many spikes, which traps whoever is sitting on it. Attacking it will break the player's weapon and hit the player with a weak Lightning bolt.

Originally Maxwell is found sitting on the throne. If the player chooses to unlock the Nightmare Lock with a Divining Rod, Maxwell will be released, momentarily stretch, then wither into a skeleton and fade away into dust. Then, two big shadowy hands will come up from the ground and pull the player's character underground. The chair will reappear with the character trapped on it, and the Gramaphone next to it will start playing music as the screen fades to black and the story ends.

When players approach Maxwell in the throne, he will say a line. Players have to click on him to read all the lines. Once he says all the lines listed below, excluding the Gramaphone ones, all he will say is "...". 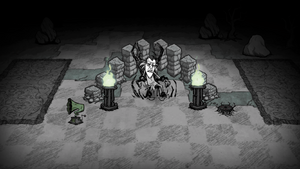 Maxwell sitting on the Nightmare Throne 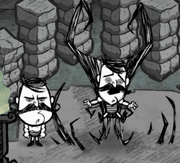 Wolfgang alongside another Wolfgang, sitting on the Throne.