“Is it New Year's Eve? Are there FIREWORKS?!”

“Quiet! This is a library!”

“I'm amazed it makes such a crisp sound.”

“Exactly the right amount of bell.”

The Old Bell is a craftable item from the Reign of Giants DLC. The two ways to gain access to the crafting recipe is to locate and mine a Glommer's Statue - which will drop the Old Bell's Blueprint as loot - or to find the blueprint from a Tumbleweed. The player must then combine Glommer's Wings and Glommer's Flower together. The Old Bell is renewable as the materials to craft it are available during each Full Moon. 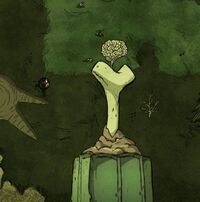 When used, the Bell summons a massive giant which consists of an enormous, scaled foot and leg with a brain perched on top of the protruding leg bone.

The giant takes a few seconds to reach the player. The screen will shake violently as it arrives and a shadow will flicker on the field where the foot will stomp. Bigfoot destroys anything it steps on, dealing 1000 damage. It will aim for where the player was standing when the bell was rung, and can easily kill an insufficiently-armed player who doesn't move out of the way in time. When Bigfoot stomps, the impact causes sleeping mobs to awaken.

Unlike most Reign of Giants items, Old Bell is not available in Don't Starve Together, despite all of its ingredients being available. It can neither be crafted nor obtained with console commands.

Bigfoot being used for mass production of logs.

Although the Old Bell has a considerably large delay, with good timing or a fixation of the target(s) the Old Bell can deal a significant amount of damage to high health mobs, making it the perfect item to deal with the likes of the Deerclops, Moose/Goose, Dragonfly, and Bearger, among others.

In addition to being used as a weapon, the Old Bell can be an effective alternate to chopping Trees with an Axe or using allied Pigs as it doesn't require Gold or Flint and takes less time. Planting Pine Cones in an area as close as possible to each other should enable Bigfoot to chop over 80 trees at once with a single step.

The Old Bell can be used to kill a herd of Beefalo at night. They will wake up as soon as they hear Bigfoot approaching but will not have enough time to move away.

Old Bells will cause Earthquakes when used in caves instead of summoning Bigfoot.

A great combination to kill bosses is to first freeze them with an Ice Staff, then use the Old Bell next to them. This deals 1000 damage while the victim is immobilized.

Note that the shaking ground causes sleeping monsters to wake up and often move out of the way of Bigfoot, thus avoiding the damage entirely.