“Must be breeding season.”

“All dressed up, but where to go?”

“What a classy bird.”

“Doesn't matter if you're from the Great White North. Still a bird.”

“Where do they live the rest of the year?”

Pengulls are neutral Mobs that appear on shores in packs of around 7 during Winter. The colony size will continually grow until the end of Winter. They spawn in the Ocean and jump onto the shore only if the player is nearby. Should the player attempt to attack a Pengull, the entire colony will slide on their bellies towards the player, surrounding them if they stay to fight, dealing a lot of damage, and pursuing the player if they flee. Pengulls deal 33 damage and may drop a Jet Feather, Morsel, or Drumstick.

Pengulls are considered innocent creatures, and killing one will add 2 naughtiness points, which can cause Krampus to appear.

The Pengull appears to be a combination of a penguin and a seagull; they have the black-and-white body and upright stance of a penguin but the hooked beak and eyes of a seagull. They have upturned heads, giving the impression of a sneer or disapproval. Pengulls have been described as "snooty", "fragile", and "dapper" (quote: "nice tux").

Pengulls are noisy creatures that spawn from the ocean when the player is nearby and walk directly to a randomly spawned "breeding ground". The breeding ground is marked by a thin layer of ice that appears as soon as the flock spawns, and is represented by a Pengull symbol on the map. Pengulls will slide away from the player when passive, but when attacked, they become aggressive. The entire pack will surround their foe and attack by pecking and jumping. They pursue their target by sliding on their bellies. 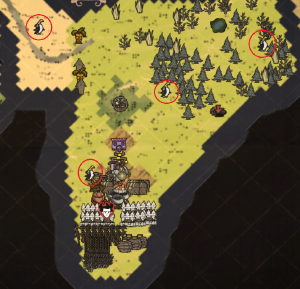 Once they reach their breeding ground, Pengulls will occasionally lay Eggs, hiding them if the player gets too close. Upon death, this egg will be part of their loot. Pengull Eggs will usually be left to rot. A Pengull that has held onto an Egg until it rots will drop the Rotten Egg on the ground and ignore it, allowing the player to obtain Rotten Eggs without having to use a Birdcage. Occasionally, they will leave the Egg when it's stale, in which case it may be eaten. It's safe to pick up an Egg if the Pengull isn't hiding it, or while it is asleep. It can be beneficial to set up a base near a breeding ground in the Adventure chapter, "The King of Winter," for an easy food source.

Pengulls spawn with limited Hunger but they can replenish their Hunger bar by eating food. If they don't eat anything, their Hunger bar lasts 12 days, after it is depleted, they will starve to death in 3/4 days. While starving, Pengulls become aggressive and will sound an alarm when threatened, calling all nearby Pengulls to attack mobs that wander close to the herd. They attack everything with health, so Walls are also going to be a target. The Pengulls will give chase on their bellies for a reasonable distance before issuing a final indignant squawk and slowly waddling back to their temporary home. Since their lifespan is similar to the perish time of their Eggs, caution is best kept after their Eggs are stale and close to spoiling. When they die of starvation, they will leave behind their regular drops.

Since there is no way to control where a Pengull breeding ground spawns, it is possible for the nesting ground to end up very near, or even at, the player's base. They will destroy any walls directly between them and their nesting ground as they migrate, though they only "pass through" other structures such as chests and fire pits. As they turn aggressive near the end of the winter, they can wreak havoc on player-built walls comparable to a grazing by the Deerclops. There is no way to avoid this, apart from staying away from the ocean near player-built walls during the winter.

Pengulls will eat food left on the ground, including meat from their killed brethren, and even Hatching Tallbird Eggs. They will also eat planted Mandrakes.

In the Reign of Giants DLC, several Mini Glaciers will appear around Pengull breeding grounds in addition to the thin patch of ice. This makes Ice renewable, and makes Rocks renewable without having to visit the Caves.

If any of the Mini Glaciers around a breeding ground are mined before Pengulls reach it, the group of Pengulls will not lay eggs, and the Pengull icon will disappear from the world map.

An effective way of obtaining drops from the Pengulls without being mobbed by the flock is to chase one away from the group until the Pengull calls can no longer be heard before attacking. Be warned, though. Returning to the flock, or any flock nearby, while the danger music is playing will cause the Pengulls to attack you. You can also move a Pengull away from its group while it is sleeping by pushing it with your character. If a group is by several trees, you can try igniting the trees to kill the Pengulls. Note that the items they drop upon death may catch fire and burn into ash, however eggs are currently fireproof.

A quick way to get plenty of Eggs in Winter is to plant 9 trees at each breeding site (indicated by the Pengull icon on the map) and light the trees once germinated and the Pengulls have settled in with their eggs. Most likely, feather drops will be converted to ash, but the eggs will survive intact and the morsels and drumsticks will become cooked. This yields approximately 8 to 10 eggs per breeding site. A more practical way is to plant 4 trees towards the middle of the breeding site. Although some Pengulls remain, a majority will be killed and more feathers survive the fire.

Another effective strategy requires gunpowder, by now you can acquire Rotten eggs either via a bird cage, or from the nesting grounds themselves (Recommended that you go at night to avoid possible Pengull aggression). Come to their nesting ground at night and plant the powder. One should be enough, you don't have to kill all of them but try to catch as many in the blast area as possible. The steps in this strategy are:

Pengulls respawn almost daily so this can be an effective strategy for so long as you have Nitre for making the powder. More can be claimed from rounded boulders or from Caves.

Another entertaining strategy to farm Pengulls, albeit mildly dangerous, is to find a Killer Bee Hive and wait for Pengulls to spawn nearby. Once a sizable amount have made their way to a close by location, prod the Killer Bees to chase you, then kite them over to the Pengulls. Get out of range of the bees and watch the carnage. This will get you Honey, a lot of Stingers, and plenty of Drumsticks, Jet Feathers, and Eggs. Plus, this can be done daily and repeatedly as the Bees will replenish in about a game day's time, as well as the Pengulls.

Below is the number of hits it takes with each weapon to kill Pengulls when playing with characters with a default damage modifier. The Weather Pain is not included due to the random nature of its projectile.