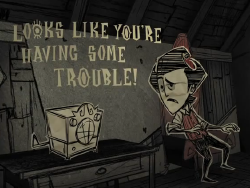 The radio as seen in "Forbidden Knowledge"
“What foul product of science is this?”

The Radio is a recurring item in the Don't Starve universe, proven to exist in some capacity both in the world Wilson is abducted from and the wilderness created by Maxwell.

It first appears when Maxwell makes first contact with Wilson in the Forbidden Knowledge video, used as both a means of verbal communication and a way to channel information into Wilson's brain.

The radio makes a second appearance in the wilderness, as it makes up the primary component of the Divining Rod. This time, it broadcasts a sound (as well as a visual cue) that increases in intensity the closer the player approaches to a Thing, Wooden Thing, or Maxwell's Door. As a part of the Divining Rod, it is required to activate the Wooden Thing in order to move from world to world in Adventure Mode, and it ultimately acts as the key to Maxwell's release from the Nightmare Throne.

As stated by a developer:

"The radio is a Voxola PR-76, manufactured in 1919 by the Voxola Radio company of Sidney, Ohio. The radio offered revolutionary sound and reception quality for the time, and was promoted by an intense national marketing campaign. Very few units were actually produced, because the factory was destroyed in a fire only days after production began. Voxola founder Robert Wagstaff went missing the night of the fire, and the company declared bankruptcy soon thereafter."