Sanity HUD icon
“I get crazy when I don't sleep.”

Sanity is the character's "mental health" in Don't Starve. The

Sanity icon, represented as a picture of a brain, is located near the character's

Hunger. Characters can gain and lose sanity in various ways. A small animated arrow appears over the

icon, indicating an increase or decrease in Sanity. The size of the arrow signifies the rate of gain or loss.

As sanity decreases, the player's vision becomes shaky, over-saturated, and bright, whispers are heard, and Shadow Creatures start to appear. These creatures become "physical" and aggressive and will attack the player when their sanity is below 15%; the sign that sanity is low enough for Shadow Creatures to attack is when the player's character covers their ears and closes their eyes while rocking back and forth, as if experiencing a bad headache.

Being alone in the wilderness will take its toll. Generally speaking, being in close proximity to Monsters, Darkness, Rain, eating bad Food, or using various magic items decreases sanity; while wearing certain clothing, eating Jerky and Crock Pot food, being near friendly Pigs, and sleeping increases sanity. See the Sanity Tables below for a complete list. 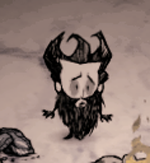 Wilson looking around from paranoia.

Characters with the potential to stay sane longer:

Maxwell - Sanity is restored at a rate of 20 points per minute.
Maxwell

- Due to her drying off quicker, the combined sanity loss from wetness would be reduced over time.
Warly 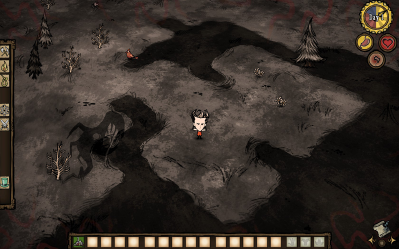 The screen when at 0 sanity.