From Don't Starve Wiki
< Seasons
Jump to: navigation, search
“It might be okay if it was cooler.”

Summer is the season in which the game typically begins, and is longer than its counterpart, Winter. By default, in Sandbox Mode summer lasts for 20 Days and resumes after 16 days of winter (Adventure Mode worlds have different seasonal variations).

During Summer, most creatures are active, and the days are longer. Crops grow, and Food is easier to find. Rain occasionally falls during Summer, which reduces Sanity and may result in Lightning strikes; however, it also speeds up crop growth. Food spoils faster during summer.

During summer, the Mactusk N' Son hunting party are not present at their Walrus Camp. Red Hounds may occasionally appear rather than Blue Hounds during timed Hound attacks; Redbirds and Crows appear; and the Koalefant appears with a reddish hide.

During days of summer, the world is presented in sepia tone as opposed to blue tint in winter.

Caves and Ruins are in a state of permanent summer. 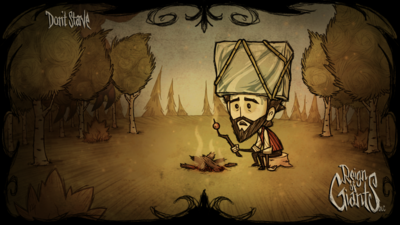 Reign of Giants Summer depicted in a promotional image.

In the Reign of Giants DLC, Summer lasts for 16 days by default. Therefore, the first Summer will last from day 21 to 36, or from day 57 to 72. Summer leads into Autumn. Summer is indicated by the world having much more sepia-toned tint than normal, which changes in brightness periodically, and by DSP which causes sound effects and music to sound far away and hot, similar to Winter's muffled sounds. Days are also much longer in Summer, while Dusk being the shortest, lasting just one segment during mid-season. The length of the Night is average.

During Summer, plants will wilt and require fertilization in order to regrow, and food will spoil 25% faster. Plants return to normal a few days into Autumn, even without fertilizer. On the other hand, fertilized crops tend to grow fast due to longer daylight but not as fast as during spring due to less rain.

Due to longer days, daylight-related Sanity is less of an issue than in other seasons.

Cactus will yield Cactus Flowers when picked during Summer.

Occasionally the Dragonfly can be encountered who will roam around the landscape, setting nearby structures on fire.

The intense heat provides the challenge of the season. Similarly to freezing in the Winter, an unprotected player will suffer damage from Overheating. The player can use or wear items such as ice, an Ice Cube, and a Chilled Amulet or stand under a tree to cool themselves. They can also use shade from a Straw Hat, Umbrella or Eyebrella,  or wear a Summer Frest or Floral Shirt to delay the rate at which they overheat. The player can also freeze a Thermal Stone in an Ice Box or Snow Chester, even placing it next to a level 4 Endothermic Fire and hold onto it to cool themselves.

Additionally, the summer season experiences a drought, and items can ignite and burst into flames. This includes plants, such as Berry Bushes, mobs, and even structures like the Science Machine. When an item is nearing its combustible point, it will begin to visually smoke and the player's character will comment on it. When the structures have been burnt down, players can hammer burnt structures to regain some of the materials back, about 25% of what it was made of if crafted.

Items and structures can be also be protected from combustion by using an Ice Flingomatic, which will fire snowballs at smoldering or flaming objects. Smoldering objects (including smoldering Pigs) can be manually cooled with Ice, Fertilizers, Ice Staff or with the player's hands (it will damage the player by 5

), but Ice is not readily available in the Summer, and in a large base, fires may start faster than the player can reach them. This makes it very hard to protect Saplings, Grass, Berry Bushes, Trees and other flammable farms during the Summer, as the fire will keep spreading until everything is burned. Items will only combust when near the player, so they may also be protected simply by avoiding them until Autumn.