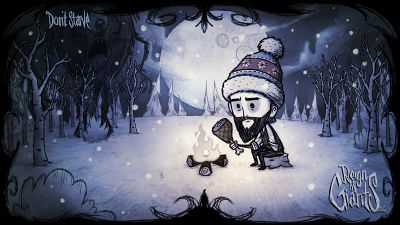 Winter depicted in a promotional image for Reign of Giants.
“Life in the frozen wastes.”

Winter is one of two seasons affecting the surface present in Don't Starve (the other being Summer). It is also one of the four seasons in Reign of Giants DLC, the others being Summer, Spring, and Autumn. By default, Sandbox Mode Winter lasts for 16 days; the first winter will start on day 21 and end on day 36. This will change if the player edit the length of the seasons in the Preferences. Stages in Adventure Mode may have different seasonal variations. Many things in the world change in Winter and surviving can become much more difficult.

The biggest change in Winter is the drop in temperature which results in freezing if the character gets too cold. Freezing quickly drops the player's health. To prevent freezing, characters must maintain their body temperature by regularly going back to a source of heat. The best way to do that is to carry around a heated Thermal Stone, and one should always have the means to make Fire in an emergency during winter. Additionally, wearing warm clothing increases the time a character can be away from fire before getting too cold. Wilson's and Webber's Beards also helps them keep warm similar to warm clothing, and their efficiency increases as it gets longer.

Building a Thermal Measurer helps the player know when the change in seasons is coming ahead of time, and tells how cold it is getting. Dusk and Night are colder than Day, and they last longer in Winter. Freezing is often a recurring death for new players as they don't prepare well enough to stop the freezing in an emergency. A good strategy to keep temperature up is to put on warm clothes on the last day of Summer (or Autumn in the Reign of Giants DLC) so heat will start off higher in winter.

During Winter several new creatures appear and some others go into hiding. The change which can be seen on the first day of Winter (even before snow begins to fall) is that the sepia toned environment gets a bluish tint, Redbirds are replaced by Snowbirds, Rabbits change into a white winter coat, and both remain an active and stable food source throughout the Winter season. When the Hounds attack, Red Hounds are replaced with Blue Hounds. Going on a Koalefant hunt will result in finding a Winter Koalefant whose trunk can be made into a warm Puffy Vest.

Some new aggressive creatures appear as well. A Walrus hunting party led by MacTusk along with his son WeeTusk and their 2 Blue Hounds will appear in an igloo at their Walrus Camp (which can be found during Summer). In addition, Deerclops also roams the Winter landscape. Deerclops is huge but slow, and will smash structures in addition to characters. A new type of neutral creature known as Pengulls will often hop out of the ocean in huge flocks during the first few days of winter.

Many creatures are inactive in Winter. Bees do not leave their hives and thus do not produce honey (Killer Bees and homeless Bees can still be found). Butterflies do not spawn from flowers; nor do Mosquitoes or Frogs spawn because Ponds themselves are frozen over and cannot be fished, although they can be walked across. Batilisks will spawn in fewer numbers but stay out longer.

In addition to Rain, snow begins to fall during Winter which builds up on trees and many other objects (this snow melts away during Summer or Winter rain). For the majority of the season, the temperature is too low for Farms to grow crops, however any crops currently awaiting harvest will still be fresh until picked. Berry Bushes, Saplings, and Grass Tufts regrow extremely slowly in Winter, to the point that they seem to stop completely. Spiky Bushes are not affected by the winter cold and will regrow as in Summer.

Nights and dusks are much longer (and days shorter) in winter, and this has a subtle impact on Sanity. Sanity slowly drains at night, and does not have a chance to fully recharge during the winter day. This is compounded as sanity falls, because night-time hallucinations (and nearness to dark) further drain sanity—spiraling into more impactful hallucinations, including Night Hands. A large set of Drying Racks (10 to 20) can be a great help, allowing Rabbits and Birds (which continue to spawn during Winter) to be turned into Small Jerky—restoring 10 Sanity each. In fact, living off Traps and Drying Racks is a simple and sustainable way to conquer winter, hunger, and sanity.

Food rots 25% slower in Winter due to the cold. Food stored in the fridge will stay fresh for almost the entire normal-length winter if its default lifetime is 10 days.

Snow is basically winter rain; it will make the turf snowy thus making it hard to see roads and paths. It will also add a layer of snow to objects such as Trees or Science Machines. Setting rain to lots (infinite) on world presets will make infinite snow during winter. Snow causes the characters body temperature to slightly decrease. Snow does not damage WX-78 the same way rain does. Snow will all melt away when it turns to Summer, or if it rains during the Winter.

In the Reign of Giants DLC, Mini Glaciers will form during Winter, and freezing is a possibility in Caves and Ruins. In addition to this, Night and Dusk are even longer during Winter in the DLC, taking a bigger hit on sanity for those who are unprepared. The DLC adds some new insulating items, like the Hibearnation Vest, to help fend off the cold.

Birchnut Trees are also not aggressive during Winter, and they have no leaves or Birchnuts left on them.

Winter in Reign of Giants leads to Spring.