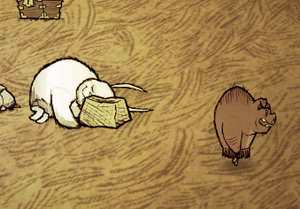 Nocturnal Bunnyman asleep during the day, while the diurnal Pig is active.
“I will allöw it a fair fight and wait 'til it wakes.”

Sleeping is an in-game state that most Mobs can enter. Most animals (such as Beefalo) sleep during night, while monsters (such as Spiders) sleep during day. Different Mobs have different sleep routines, and not all Mobs go to sleep by themselves. Mobs with a home (like Spiders or Pigs) will attempt to return home when they need to go to sleep. If left homeless, they will fall asleep on the spot at the time they usually sleep. The player can put Mobs to sleep by using a Pan Flute or Sleep Dart, or by eating a Mandrake. Sleeping Mobs can be pushed around.

Wes sleeping on a Straw Roll.

Wickerbottom is the only character which is unable to sleep due to her insomnia. She still gets knocked out by cooking or eating a Mandrake.

The following Mobs can be put to sleep: