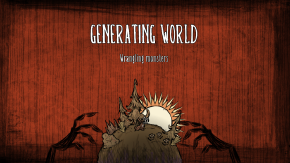 Surface is a default starting world where Maxwell (or Charlie in Don't Starve Together) cast a Character chosen by the player to struggle for survival in Sandbox Mode. It is also the featured world in the five levels of Adventure Mode but with exceptional difficulty. In Sandbox Mode, it is the most hospitable and the least dangerous of the three worlds due to the abundance of food and other resources needed for basic survival.

The Surface World has many biomes, each with different features. Trees and Saplings are most common in the Forest Biome along with the occasional presence of Pig Houses and Spider Dens. Grasses, Rabbit Holes, and some Boulders can be found in Savanna. Grassland is the most friendly of all the biomes because it contains all the resources needed for survival like Logs, Grass, Twigs, and Flint. Marsh, however, is the most dangerous because of the Tentacles that live there and is the only place where Reeds, Rundown Houses, Spiky Trees, and Spiky Bushes can be found. Rockyland is composed entirely of bare rock spread across the entire area and some Tallbirds and their nests.

The Surface World is the most atmospheric environment because it is influenced by weather and seasons, phenomena which have different impacts on the world. Rain is a weather in which a character will take a sanity damage over time and affects the growth rate of some plants in the world. Lightning will normally occur during heavy rain and can randomly set flammable objects ablaze when struck. The Day-Night Cycle will affect the availability of most mobs and mushrooms, and a character will take sanity damage during dusk and night. Dynamic seasons will affect the appearance of the world; availability of resources; and mob behavior, availability, and appearance. During a Full Moon, Pigs will transform into Werepigs.