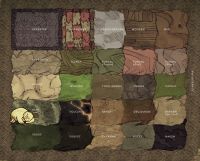 Turfs of the world by dominance: left-to-right, top-to-bottom.

“A chunk of ground.”

“The ground is boring.”

“A piece öf the battlefield.”

“Me ain't no ground lubber.”

“That's a chunk of ground.”

Turfs are Items that represent the chunks of a Biome's soil. Most ground tiles can be dug up using a Pitchfork to acquire a Turf item and reveal the bare ground underneath. This excludes Roads/Trails and Sticky Webbing. A player can use a pitchfork to destroy Runic Turf (and place another turf), but not harvest it. 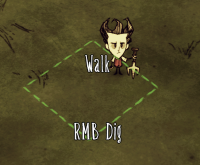 Each type of Biome produces a different Turf item when dug up (see below). Turf items can be placed on bare dirt tiles to change the ground's appearance. Digging up the ground in a Biome has no effect on the creatures residing there.

Turf can be used as fuel in all structures except the Night Light, and cannot be used as fertilizer.

These items are naturally generated above-ground in a world, and are all obtained by using a Pitchfork (except for Sticky Webbing, which cannot be obtained).

These items are naturally generated in the Caves of a world, and are obtained by using a Pitchfork.

world, and are obtained by using a Pitchfork.

These items are typically easier to craft than to find throughout the world, as they appear only under specific circumstances, but if found, they can be obtained from the ground by using a Pitchfork.

In the Shipwrecked DLC, craftable Turfs will not spawn Puddles. Tides and expanding Puddles can still flood crafted Turfs, however.

Turfs have a priority rating regarding the way they overlap. For instance, a Carpeted Flooring turf will always be "dominant" over a Checkerboard Flooring turf (when the two are laid next to each other), and its design will take up some space on the Checkerboard tile. This has no impact on the properties of either turf used, but can make a big difference visually.

The following list starts with most dominant turf, going to the least dominant: 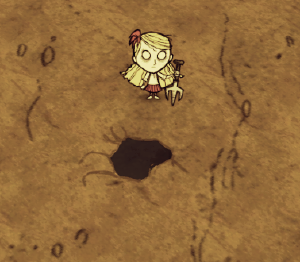 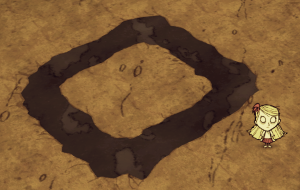 One Sandy Turf surrounded by eight Marsh Turfs. Again, the Sandy Turf is dominant and larger, despite there being only one.