“The label says "Keep out of reach of children."”

“I am the goddess of fiery destruction!”

“Power of fire mountain is in Wolfgang's hands!”

“The fiery breath of the volcano is mine to command!”

“I can feel it rumbling with volcanic pressure.”

“The power of the volcano is in my hand.”

“It feels at home in my hands.”

“The volcano does our bidding!”

“One must be careful with this.”

The Volcano Staff is a Volcanic item introduced in the Shipwrecked DLC. It can be crafted using a Fire Staff, 4 Obsidian and a Dragoon Heart, but doing so requires being near a Obsidian Workbench or wearing a Brain of Thought. When used, it rains down Dragoon Eggs where the spell was cast. There is a small chance for some of the Dragoon Eggs to stay intact, and Lava Pools will also form. 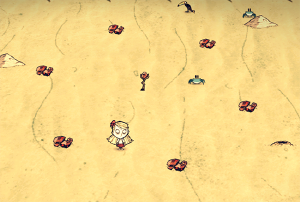 The Set Piece - picking up the Volcano Staff will start a Volcano eruption.

The staff can occasionally be found in the Chest when an X Marks the Spot is dug up. Additionally, the staff can be found as Set Piece with the staff in the middle and 6 Obsidian forming a circle around it. When the staff is picked up from the Set Piece, even by a Prime Ape, the Volcano immediately erupts and Dragoon Eggs rain from the sky.

When the Volcano Staff is brought to a Reign of Giants world via the Seaworthy and used there, it will fail to activate and nothing will happen, accompanied by the player's character saying that it will not work there.