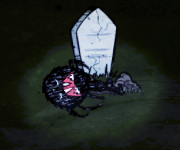 “It's not myyy way, but a burial will have to do.”

“That is a most unusual skull.”

“The skull gives me the willies, too.”

“Don't think you'll be able to escape that easily.”

“How did this get here?”

“Not your run of the mill skull.”

“Stop staring at me or I'll bury you!”

“Whut sorta neck did this sit atop?”

Webber's Skull is an item used to unlock the Don't Starve: Reign of Giants character, Webber. It has a 5% chance to drop when any Spider dies, including variants in Caves and Ruins. It can also be dropped when any tier Spider Den or Spilagmite is destroyed or a Spider Queen is killed with the same chance. The skull will not drop if it already exists in the world or if Webber is already unlocked. Trapped Spiders will not drop the skull.

Burying Webber's Skull in a dug-up Grave will cause Webber to appear under a "spotlight" after the grave is struck by Lightning. He will then jump back down into the grave, disappearing, while 6 Spiders appear in his place. Webber is then unlocked in the character menu. The Spiders will be aggressive towards the player, though killing them is not necessary for unlocking Webber.

Webber's Skull will keep dropping as long as it hasn't been buried, but not more than one in each world unless the previous one is destroyed.