From Don't Starve Wiki
Jump to: navigation, search
“Not all deaths are the same.”

Wendy is the third playable Character that can be unlocked via Experience, with 640 XP, and one of the 11 playable Characters in Don't Starve Together. Wendy has a morbid personality; she always relates everything to death and how depressing life is, including herself.

Thanks to her personality she loses less Sanity in the Dark or when facing Monsters, giving her an easier time with managing Sanity. She can summon the Ghost of her late sister Abigail to assist her in combat. To make up for this, Wendy herself deals less damage in both melee and ranged combat. Abigail gives Wendy a more 'passive' playstyle, letting her sister deal with most threats and staying away from danger.


Wendy's special power is her ability to summon her dead twin sister, Abigail. Wendy starts with a wilted Abigail's Flower in her inventory, which blooms in roughly 2-4 full Days, at which point she will be able to summon Abigail.

When Abigail's Flower has bloomed, it can be placed on the ground to prepare the summoning. The summoning requires the death of a Mob near the Flower. This includes Wendy herself but excludes any captured Mobs "murdered" through the inventory. Summoning Abigail will cost 50 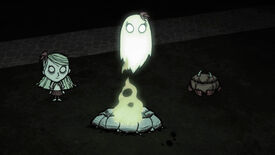 Wendy and Abigail by the fire.

Abigail follows Wendy and will attack Mobs that either attack Wendy or that Wendy herself attacks. Abigail cannot hurt Wendy, and normally doesn't attack any allies, such as Chester, unless Wendy herself attacks them first. Abigail will always move away from Wendy when she comes too close. Abigail's attack damages all mobs in range at the same time, which makes Wendy exceptionally strong against groups of mobs like Spiders and Bees as Abigail can keep stunning them to keep them from attacking back.

Abigail's Flower will be dropped on the ground when Abigail is killed. It will be completely wilted and it will have to bloom before it can be used again.

Another special power Wendy has is that she suffers 25% less Sanity drain from Darkness and from being near Monsters. The effect only extends to those two cases though, meaning that other things that drain Sanity (e.g. Evil Flowers, Dark Sword, Night Light etc.) will drain it at the same rate as other Characters (except Walani).

Wendy's attacks are 25% weaker than most other Characters' in order to balance out the ability to summon Abigail, and the lowered Sanity drain. For example, Wendy needs two attacks to kill a Rabbit with the Boomerang or a Tool. As such, hunting certain Mobs can be much more difficult whilst playing Wendy as she deals less damage by herself. Attacking stronger mobs without Abigail is not advised.

In the Shipwrecked (SW) DLC, Abigail is immune to Poison, making her useful when fighting venomous enemies. She also can float over water making her able to follow Wendy between islands, unlike most other Followers.