Wickerbottom is the fifth playable Character that can be unlocked via Experience, with 1280 XP, and one of the 11 playable Characters in Don't Starve Together. She is an old, intelligent librarian, an author (and apparently a publisher too), and is able to identify many different types of fauna and flora by their scientific names.

Wickerbottom starts the game with 2 Papyrus in her inventory and (due to her vast knowledge) she is able to craft Science Items with a lower tier Crafting Station than other Characters. She is able to craft Books that give different effects when read in exchange for Sanity, with a maximum Sanity of 250. Wickerbottom suffers from insomnia (the inability to sleep), and should only eat fresh Food due to her old age. Wickerbottom is suited for both early and late game playthroughs providing an easy start with her knowledge and interesting strategies with her Books in the later days. 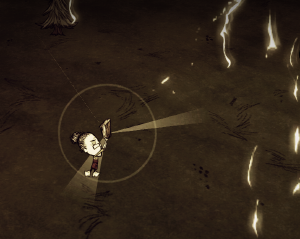 Wickerbottom reading the "The End Is Nigh" book
Main article: Books

Wickerbottom's special power is a Crafting Tab called "Books". This gives her the ability to craft 5 different magical Books with Papyrus and other different ingredients. She can read these for beneficial effects, but at the cost of a lot of Sanity.

The Books that she can craft are :

with each reading session. This is somewhat offset by Wickerbottom's higher maximum Sanity, but eventually some Sanity restoring means will be required for continued usage of the Books.

per prototype for those since she already knows them at the start of the game. The rest of the recipes can be prototyped with a Science Machine even though they would normally require an Alchemy Engine. Therefore, only a Science Machine is needed to unlock all Science recipes for prototyping. The one exception is the book "On Tentacles" - she needs an Alchemy Engine to prototype it. This free tier of knowledge does not apply to Magic research machines though.

Wickerbottom lacks the ability to sleep in a Tent, Bed Roll, or Fur Roll due to her being an insomniac. This means that crafting those Items and Structures would be a waste of resources and the player will need other means to restore Sanity.

She also hates spoiled Food, causing her Sanity to suffer greatly. Eating stale food costs her no Sanity, but neither does it restore any. Stale Food also restores less Hunger and less Health than fresh Food of the same type. Raw Food has no penalties outside of its normal ones (e.g. Green Caps) if it is fresh.

In the Reign of Giants (RoG) (and by extension, Don't Starve Together (DST)) and Shipwrecked (SW) DLCs, Wickerbottom will be unable to sleep in the Siesta Lean-to.

In Shipwrecked, due to the lack of Tentacles in the world, the "On Tentacles" Book has been replaced with Joy of Volcanology. When read, this Book will summon 4 Dragoon Eggs to fall at her location, dealing massive Fire damage. Players can still craft and use "On Tentacles" but only if they use the Seaworthy and travel to a non-Shipwrecked world.