Wigfrid is one of the two playable Characters exclusive to the Reign of Giants DLC. She is the seventh Character to be unlocked via Experience, with 1920 XP. Although Wigfrid has the appearance of a Valkyrie, she's just a performance artist acting out a role.[1]

Wigfrid starts with her own Battle Spear and Battle Helm, along with four (4) pieces of Meat. Despite it being all an act she is good in combat, having an increased damage modifier, natural defense and higher maximum Health at 200 points. When she kills an enemy, she gains a percentage of that enemy's attack damage as Health and Sanity. To make up for the boost, Wigfrid is a carnivore and refuses to eat anything but Meat based food, stating it's no food fit for a warrior. She also has only a maximum of 120 Hunger and 120 Sanity. 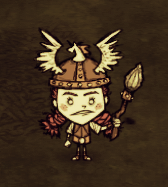 
Wigfrid starts the game with the Battle Spear and Battle Helm, two craftable items that are exclusive to her. The Helm protects for 80% of incoming damage and has nearly double the durability of a Football Helmet, while the Battle Spear deals 42.5 damage and has 200 uses. Both these items prove incredibly useful in the early days of the game, due to their cheap cost and high stats.

Wigfrid does 25% more damage (melee and ranged combat) and takes 25% less incoming damage. When she kills a Mob, 25% of that Mob's attack score is added to Wigfrid's Sanity and Health, allowing her to continue fighting enemy after enemy. For example, once she kills a Tallbird she will gain 12.5

Wigfrid has a Meat-only diet, limiting her choice of food greatly and requiring her to always be hunting for food in the early days instead of a more relaxed approach.

Her low Sanity and Hunger also means that it is more difficult to maintain them without fighting.