“Not wild about being close to this guy.”

“I will wrestle you.”

“What's it got to be angry about?”

“I sense a kindred spirit!”

“Not wild about ye.”

Wildbores are neutral Mobs in the Shipwrecked DLC. They are the Shipwrecked counterpart to the Pig and wear a grass skirt, have a hunched posture, and are covered in brown fur. They spawn naturally in-game and live in Wildbore Houses on beaches, which they will return to at dusk.

Wildbore will eat any Food items on the ground. The player can befriend them by feeding them Meats or Eggs, after which they will assist the player in chopping down trees, hacking Bamboo Patches and Viney Bushes and attacking mobs. Wildbores will eat Petals, Vegetables and Fruits, producing one Manure per item (except Coconuts). The player can feed these items directly by clicking on the Wildbore while holding the item to be fed. Feeding them too frequently will increase their annoyance, since the player characters needs to approach them to give them food.

Wildbores have an annoyance threshold. Annoyance increases when the player makes the wilbore run away by standing close to him, and when the threshold is reached, he will start attacking the player. Annoyance will reset after 10 seconds without being disturbed.

Wildbores will attack the player aggressively if they have hammered down the Wildbore's house.

As with Pigs, Wildbores will walk around during daylight hours, and run home at Dusk. Also much like pigs, they will attack any hostile mobs (Snakes, Spiders, etc.) that get near them. The main difference between Pigs and Wildbores, however, is the Wildbores' unusual attack pattern. They use a very unique kind of kiting to fight their enemies. When provoked, a Wildbore will prepare itself and charge toward its target, either punching or slamming both fists down. Whether they have landed a hit or not, they will pull back and run before charging again. A Wildbore will not give up its attack on the player until they are dead or left the island, or the Wildbore has acquired a new target.

Attacking a Wildbore after it starts charging for the player character allows the player character to strike first, canceling his attack. A Wildbore caught in this state can be hit multiple times before it recovers. This strategy allows killing one Wildbore easily, but it is less effective against a group of Wildbores.

Like Pigs, if a Wildbore eats 4 pieces of meat-based Monster Foods (

), or during a full moon, it will turn into a Werepig. A typical Werepig will transform back into a normal Wildbore after 4 game hours of being a Werepig or at the start of the next day, whichever comes first. (Note that Jellyfish does not count as meat-based Monster Food and will not cause the Wildbore to transform.)

Wildbore take 2 blasts from the Ice Staff to be frozen and 2 Sleep Darts to be put to sleep.

Below is the number of hits it takes with each weapon to kill a Wildbore when playing with characters with a default damage modifier. The Weather Pain is not included due to the random nature of its projectile.

It takes 2 blasts to freeze a Wildbore with an Ice Staff and it takes 2 Sleep Darts to put it to sleep.

Much like Pigs before them, Wildbores will have a random name given to them. The name may be viewed by mousing over the Wildbore. Possible Wildbore names are the same as the possible names for Pigs.

These quotes what Wildbores say in various situations. They are currently mostly identical to Pig quotes, with some differences and additions. 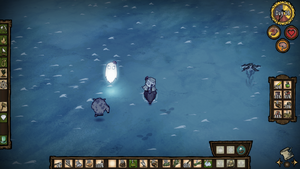 Bugged Wildbore walking on the ocean.