When he has a high amount of Hunger, he moves faster, does more damage, and has more Health than most other Characters. On the other hand, he becomes weaker when his Hunger is low. Wolfgang also has a larger maximum Hunger at a value of 300, but it will decrease faster or slower depending on how full it is. Wolfgang becomes scared when in the Dark or near Monsters though, so in those cases he loses Sanity more quickly than normal. His perks give him great advantages during both melee and ranged combat, easily dispatching even the toughest foes at full Hunger, but leaves him exposed when his stomach is empty.  Overall Wolfgang is a very powerful Character, able to withstand the toughest foes, though his drawbacks can be tough to manage for inexperienced players.

Wolfgang's special power is his Mightiness level which increases or decreases depending on the amount of Hunger he has. There are three stages of Mightiness which give Wolfgang different physical appearances and stats:

Regular Form:
This is Wolfgang's starting form. His appearance is that of a slim fit man, visibly having thicker arms than other characters. He starts with 200 Health, and has no bonuses to damage or speed. Wolfgang will stay in this form if his Hunger is between 100 and 225.

In this form, Wolfgang's Hunger decreases 1.5x faster than normal. Unlike his two other forms the magnitude of these modifiers are not related to his Hunger level. 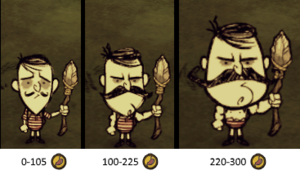 Mighty Form:
This is Wolfgang's buffed form. It's a temporary physical upgrade that is activated when Wolfgang's Hunger goes to 225 or above. When this form is achieved the top of Wolfgang's costume will be ripped off, he'll gain numerous arm muscles, and his head and mustache will become bigger. When in this state he'll also become taller.

His maximum Health will go from the regular 200 up to 300 depending on Hunger. He will receive a damage bonus between 1.25x and 2x and he will also receive up to a 25% speed boost.

Because of this physical upgrade, Wolfgang's Hunger decreases between 1.5x and 3x faster than normal.

The magnitude of all these modifiers will also linearly decrease as Wolfgang's Hunger is drained. E.g. at 300 Hunger he will do 2x more damage, at 299 Hunger he'll do 1.99x and so on.

Wimpy Form:
Wolfgang's debuff is a physical downgrade when at 100 hunger or less. His appearance will become a sad and more pathetic-looking version of himself. In this state he'll also become shorter.

Wolfgang's movement speed will gradually go down to 90% in this state and his Hunger will decrease between 1.5x and 1x  the normal rate.

The magnitude of these modifiers will linearly decrease in value as Wolfgang becomes more hungry. E.g. at 100 Hunger he will have 200 Health, at 98 Hunger he'll have 199 Health and so on.

Wolfgang will stop and show an animation when changing forms, leaving him vulnerable for a couple of seconds. This can be extremely dangerous when running from enemies. Because he's Nyctophobic (someone greatly afraid of the dark), Wolfgang suffers from 10% greater Sanity drain from Monsters and the dark, so a little more care should be taken with sanity management. The effect only extends to those two cases though, meaning that other things that drain sanity (e.g. Evil Flowers, Dark Sword, Night Light etc.) will drain it at the same rate as they normally do. If the player has no Sanity recovering Items it is recommended that they sleep through the Night to avoid Sanity drain, since it's harder to refill than Hunger.

In Don't Starve Together, When riding a Beefalo, Wolfgang has a external speed multiplier equal to the reciprocal of his scale. In another word, the mightier he is, the slower he is.